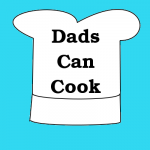 First up congratulations to @MrMomWorld for his win in the first Dad’s Can Cook Contest.  He made an Eggplant Parmesan that made me think of trying Eggplant again.  Bad childhood memories there :-).

Unfortunately he was the only entry.  After some thought on that I decided that it was too short of a time frame and a difficult first challenge.  Therefore I am changing it to a monthly challenge.  The first month being October. I have also gone with an easier challenge for this month.

There has been a lot of talk lately on football.  I was following both the Seahawk and Patriots games on Sunday while I worked just by following my twitter feed.  I live in British Colombia and remember watching the Seahawks with my dad and thus they became my team.  This was before the 1000 channel universe of today so we got the Seahawks game but my dads team is the Patriots.  We would watch them whenever they were on so I ended up following two teams.  I remember going to Seattle to watch a game between the Seahawks and the Patriots.  At the time we were distantly related to the Patriots kicker and got to meet the team.  I think I was too excited to see the game to worry about who to cheer for.

So this weeks challenge is Sunday Football Snacks

This contest will run until midnight Sunday Oct 30th. I look forward to everyones creativity and some new ideas.