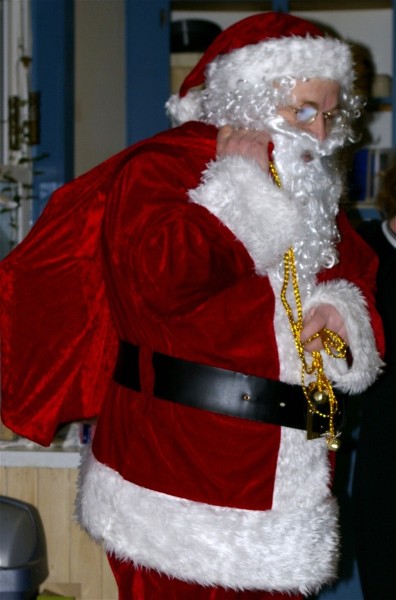 This is the question that I was dreading over Christmas. It started out when my son Philip (9) worked out that there was no way for Santa to get to every house in the world in one night. That was scare number one. Fortunately he answered that one himself but that led to problem two. His answer was that Santa must use magic to get around the world that fast. Therefore he could supply a real working wand like in Harry Potter. Thus his letter to Santa read like “I figured out how you get around the world in one night, Magic! I would like for Christmas a real working wand, a real flying broomstick (Firebolt), …” He went on to list half a dozen magical items. We though about making up a letter from the Ministry of Magic explaining that magical items were forbidden for people that had not demonstrated any magic. We decided against that in that we felt like we were crossing a line. He knows that Harry Potter is make believe but deep down he hopes its real. So he got no magical items for Christmas and no explanation as to why. His sister, Margaret (6) came up with the answer that they were both underage. That was a suitable explanation for him.

The second scare came Christmas eve. We were staying up at my wife’s uncle’s cabin with 3 generations from 2 families. Philip tried to stay up to see Santa and ignored our statements that Santa wouldn’t come if he was awake. At 11:30 something caused him to go downstairs where there were adults still awake and the cookies and milk he had put out had been eaten. He went straight for the tree and could see that there were no more presents than when he helped put them out. Needless to say he was upset that someone had eaten the cookies. We never tried to explain that but he eventually went back upstairs and to sleep.

It looks like we’ve gotten through this Christmas but I don’t think we will get through the next. We have always been very open with what is real and what isn’t. As well honesty in the treatments that he has gotten. If something was going to hurt we told him that. We were also honest with him when a buddy of his going through treatment didn’t make it. Thus I’m starting to feel guilty about Santa but its part of growing up. We’ve started telling him about Saint Nicholas and the origin of the story. When the time comes I want to explain to him that the spirit of Christmas lives in all of us. The question I am debating is whether to tell him myself or wait for him to ask the question. Any thoughts? Anybody been preemptive in telling their kids? How did you go about telling them?