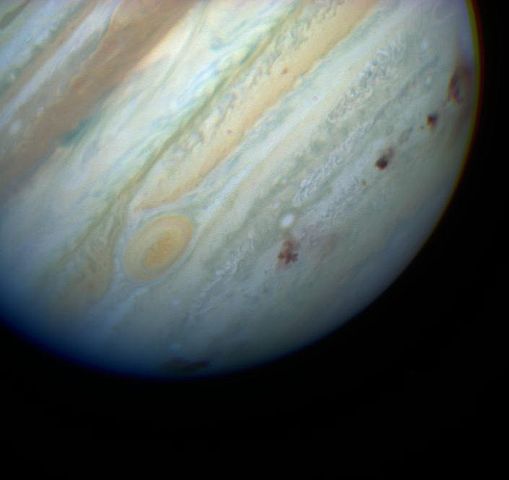 Years ago I had the privilege of attending a seminar put on by the Shoemakers and David Levy talking about this new comet they had discovered. The cool thing about this comet was when they did the math to figure out its orbit they found that it was going to hit Jupiter. Needless to say that got my attention.

The comet was named Shoemaker-Levy 9. On its way into Jupiter it broke apart in to 21 pieces. The picture below was taken using the Hubble Space Telescope. They had to take six pictures to get all of the pieces. At this point it was spread out over 1.1 million km.

The largest of the fragments was about 2km across. When it hit the impact released the equivalent of 6,000,000 megatons of TNT. That is 600 times bigger that the worlds entire nuclear arsenal. It left a dark mark on Jupiter almost as big as the earth.Below is a series of images taken from the Galileo Space Probe of Fragment W as it impacts on the dark  side of Jupiter.

In the picture below you can see the dark marks left by the impacts. Recently we saw a new dark mark that matched the characteristics of the ones from Shoemaker-Levy 9. It is probable that Jupiter got hit again but we didn’t see it, only the aftermath.

What is a comet?

Comets are ice, dust and rock held together by its own gravity. They travel through space in an elliptical orbit. These orbits can be as short as a few years or thousand of years. When we see them they have a thin atmosphere and a tail. These are caused by the solar wind and radiation as it comes closer to the sun creating off-gassing.

They are mainly located in the Kuiper belt which if out beyond the orbit of Neptune. Pluto resides in the Kuiper belt. He picture shows the main belt in green. The gaps are areas that have not been observed rather than an actual gap. Plus there are a lot more that we have not found yet. The orange ones have been knocked lose by Neptune and are the ones that we sometimes see.

What is an ellipse?

When we talk about an elliptical orbit we are talking about an ellipse. There are two easy ways to see an ellipse. The first is to take a piece of paper and pin it to a cork-board using two pins somewhere near the middle of the page. The distance between the pins will determine the shape of the ellipse. Then take a piece of string and tie it into a loop so it fits over the pin with some slack. Then keep the loop taunt with a pencil and draw around the pins. 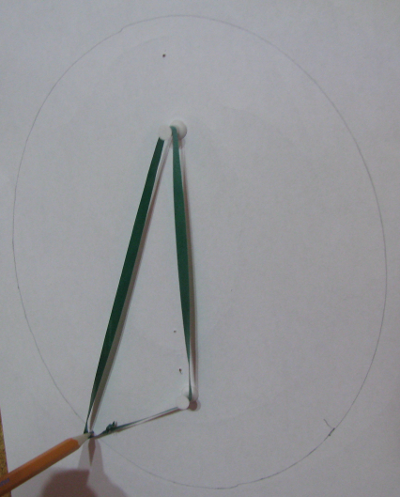 The second way is with a cone. If you cut a cone at an angle the resulting surface is an ellipse. I tried this with some play-dough. To get a nice shape I cut using a sharp serrated knife although you could demonstrate with something less sharp and little more mushing of the shape. The angle of the cut determine the shape of the ellipse. 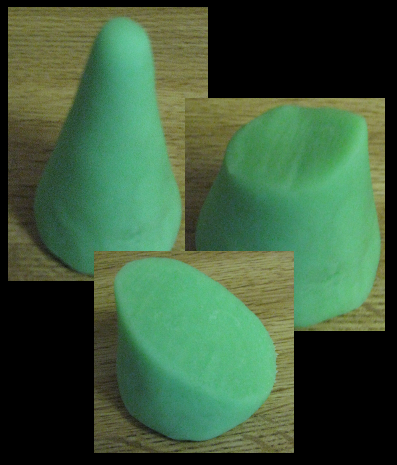 6 thoughts on “C is for Comet”