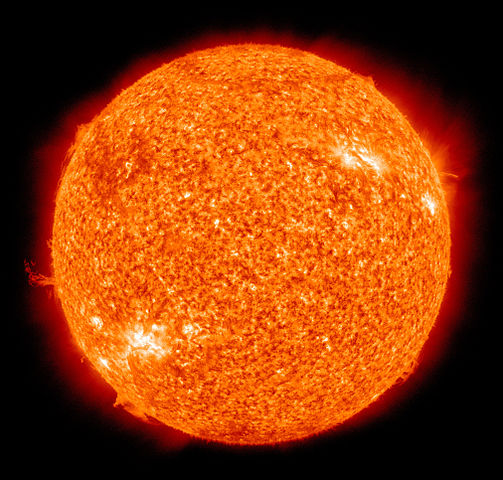 We often talk about the sun as a big ball of fire but that isn’t really true. The sun isn’t burning like we think of burning wood its energy source is nuclear fusion. Scientists do frequently refer to the fusion as the sun burning fuel.

At its simplest fusion is the merging of two atomic nuclei into one. So two hydrogen atoms become one helium atom. The resulting atom is slightly lighter than the two that created and that extra mass is released as energy. The process is a lot more complex than that.

Stars can create all the elements up to iron through the fusion process although for the heavier elements you need a bigger star. For the elements heavier than iron you need a supernova.

So how long will our sun shine for?

It has been burning for 5 billion year and the hydrogen will last another 5 billion years. Towards the end of the hydrogen it will expand into a red dwarf. At this point it won’t really matter to the Earth as it will have been swallowed. When it runs out of hydrogen it will start fusing helium into carbon and oxygen. Eventually it will blow off its outer layers and become a white dwarf. These glow from the left over heat and they are no longer fusing anything.