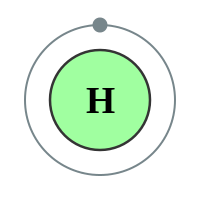 In both of the two previous topics we have mentioned hydrogen. In stars it undergoes fusion to become helium. In Gas giants it is most common element. As it turns out it is the most common element in the universe and makes up about 75% of the mass of normal matter. Normal matter is only about 17% of the matter. That is another whole article but I’m past D so ‘D is for Dark matter’ is out.

Hydrogen is the simplest of the atoms, consisting of one proton and one electron. When it was discovered it got its name from the fact that when it is burned it produces water. Thus hydrogen is made up of hydro, Greek for water and genes for creator.

The symbol for hydrogen is H. Water which is H2O is made of to hydrogen atom and one oxygen atom. Without water life could not exist. The other common area we see hydrogen is in the form of hydrocarbons. Hydrocarbons are made up entirely of hydrogen and carbon. Our cars burn hydrocarbons, some electrical plants do. Our civilization is heavily dependent on using hydrocarbons for an energy source. Hopefully we can find a cleaner energy source but that’s another article.

Splitting water to get hydrogen gas.