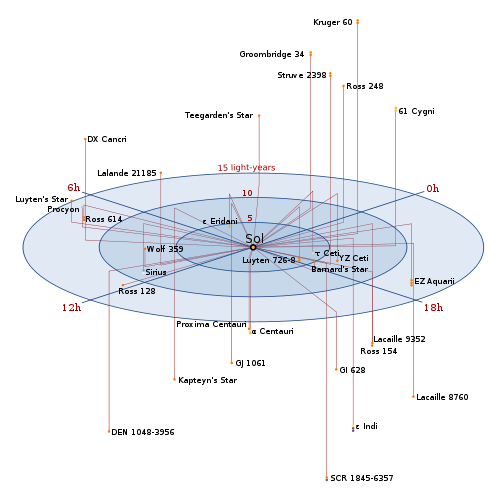 Ever looked up at the stars and wondered how far away they are? The answer is far but exactly far will take some explaining.

When we talk about those distances we talk about light years. So what is a light year. When you turn on the light in a room the whole room is light up instantly. Well not quite, it actually takes some time for the light to travel. There is actually devices called laser rangefinders that send out a pulse of laser light and time how long it takes for it to reflect back.

So how fast does light go? About 300,000 kilometres per second. Since the circumference of the Earth is about 40,000 kilometres light could travel 7.5 time around the earth in a second. Well if it wasn’t going in a straight line.

The nearest star is actually a pair of stars and there is a third that they are not sure is actually part of the system. The system is called Alpha Centauri and is 4.37 light years away. One of the suns does have a planet but its orbiting 10 times closer than Mercury is to our sun. So the light that we see from Alpha Centauri has taken 4.37 years to reach us. Getting there? Well that is another whole article, but a long time.

The farther item we have found is 13.2 billion light years away. So that light has taken 13.2 billion years to reach us. That means that we are effectively looking backwards in time. The object that we are seeing no longer exists. When the light left the object the Earth and our sun didn’t exist.

So when you look up at the night sky think about how far that light has travelled to be seen by you. It has been travelling for at least 4.37 years and probably a lot long than that.