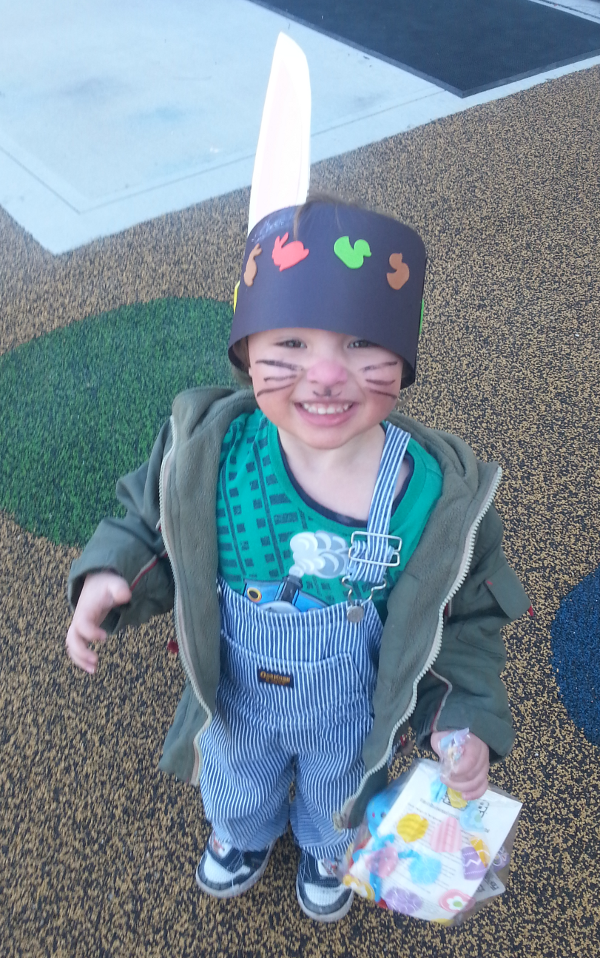 It has been a week of trying to catchup on my housework. My wife plays the flute in an Irish band and kids do Irish dance. With both of those there are numerous events running people around to. Both groups do performances at a number of retirement communities and church events. Between that and skiing I have not had a lot of time and the house has suffered. We are going back up to the cabin for skiing this weekend. After that things should return to normal and I can get caught up.

Ian’s Preschool had a Easter party complete with a visit from the Easter Bunny. Lots of fun. The picture is from soon after he found his bag. They had to find the one with their name on it.

We had a slow start get back at it after our spring break. He spent the whole week doing Math and Chinese.

My daughter is leaning to join us next year. On the positive side she recognizes that she would have more freedom to learn what she wants, how she wants and at her pace. Her pace will faster than at school. Her concern is her friend. They just became friends this year and it is her first real friend that isn’t a family friend or a group that she is tagging onto. I agree with her that I don’t want to do anything that would harm that friendship.

This week she got her own email address to communicate with her friend. All incoming and outgoing mail is copied to me for safety. She is aware of this and understands it is a condition on having an email. We also had a talk on who get her email address. The basic rules is it never gets used online and I have to approve anyone else. We also talked about the fact that not everyone online is who they say they are. We have had that talk before but I felt it was important to review given the new responsibility.

Somehow I got the job of buying and cooking this year’s Easter turkey. I have cooked many turkeys so I am not worried although it is not going to be in my kitchen and it is an oven that I know to cook a little hot. The bigger problem is going to be getting everything up to the cabin. I have a lot more food this time it seems.

My daughter has learned to make her own pancakes in the morning. She made them a couple of weeks ago with some help from mom but this morning she did it all. They came out great.

You know you are a blogger if you have ever cropped an image to hide the mess.

Last weekend, having dinner up at Grandma and Grandpa’s we had Ice Cream. This led to the chanting of ‘I scream, you scream, we all scream for ice cream.’ Someone asked about the origin of that saying which led me to get out my phone and do a Google search. I expected it to be an advertising jingle but the truth is much more funny. I do think it was used in advertising at some point. I have vague memories of an ad. The video I found was of the origional song recorded in 1925.