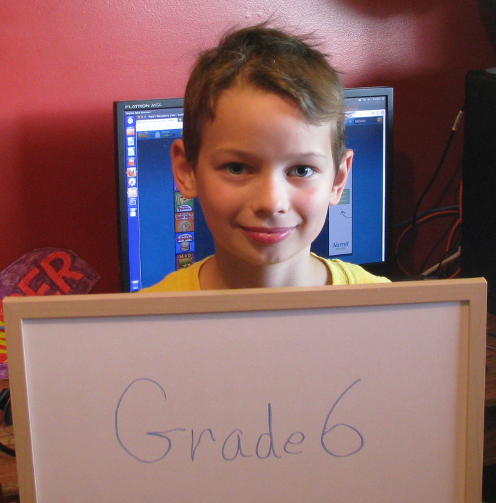 Lets start with my oldest and the only one that has been homeschooled to this point. Philip is 11 and entering grade 6. We pulled him out of the public system at the end of his Grade 4 year. Last year we homeschooled for grade 5 and it was a learning experience for all. The first semester was a pretty steep learning curve as my original plans and schedules quickly went out the window. He is ADD and on medication so tight schedules don’t work and that was part of the problem at public school. As the year wore on we got into our groove and found methods that worked for us. Overall I believe it was his best year academically.

Philip is a voracious reader. Currently he is reading Eragon after watching the movie. We told him the book is better. His best subjects are science and math but we saw a great improvement last year in his writing that I attribute Excellence in Writing’s Student Writing Intensive. He is looking forward to the new year and we have some cool things planned.

Philip is also a two time cancer survivor. There is more about this in our About Us page. He was diagnosed at 3 and a half. Beat it after 9 months of treatment. It came back after a year and he beat it a again. He is now 5 and a half years cancer free and 4 and a half off treatment. 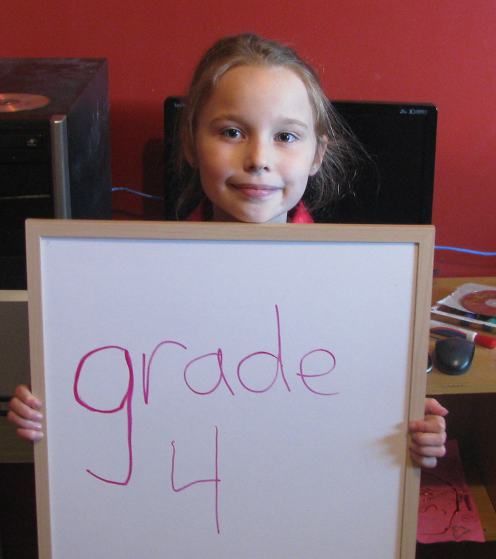 Margaret has always been an excellent student. That earned her the right to choose between the public system and being homeschooled. We pulled her out for a day so we could do a mock homeschool day. That gave her an opportunity to see how we worked. It also gave me an opportunity to test out some curriculum. Letting her be involved in choosing the curriculum helped to show the cooperative approach we take to learning. The ability to work ahead and not wait for others also weighed heavily on her decision. Overall she has agreed to a one year trial. I expect that she will continue past that but it is still her decision.

Math and reading are her best subject with science a very close third. Her writing is better than Philip’s was at her age. I expect that the student writing intensive will help her immensely. Overall I expect that she will fly ahead in math. The reading I have picked in a little more advanced but still it won’t take her long. The rest we will probably go deeper that we need for this grade level. I look forward to having a more direct role in her learning and learning more about how she learns. 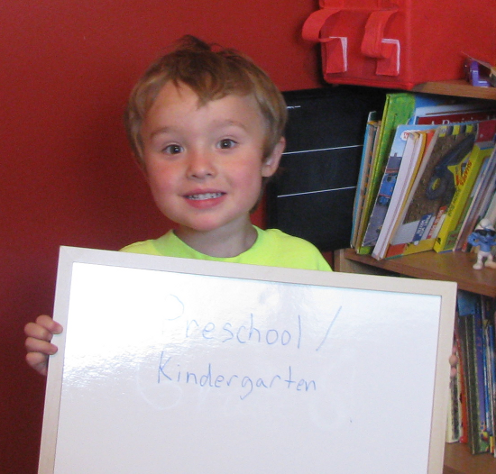 Ian is four and thus has another full year of preschool before we can enroll him in kindergarten either with the public system or homeschool. He currently attends a preschool two half days a week but looking at the learning outcomes for kindergarten he is ready to start. So we have decided to unofficially start kindergarten. Basically I am going to aim for those learning outcomes and see what happens. With my older two I know that they are capable of learning on their own and to some extent directing their own school path. At kindergarten that is a little much to expect and that means I will have to be a much more hands on teacher than I am. So this is largely a practice run for daddy with the hope of a bit of a head start for him.

Ian is very much like other 4 year olds, full of energy and hard to get to sit for more than a couple of minutes. He wants to learn stuff particularly how to read so that should help. Also with the two older kids doing schoolwork he will probably decided to play going to school. We can work with that. His favorite show is by far Mythbusters to the point that his 9th official word was ‘boom’ I expect that once he figures out how to read he will be off and running.