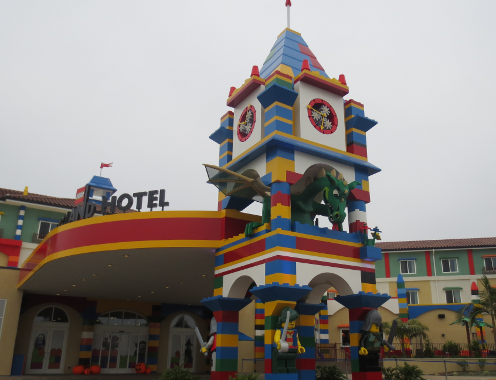 As I said yesterday the Legoland Hotel is amazing, to being over the top. Each floor has its own theme. So when we registered we had to pick a theme. We chose the ‘Kingdom’ theme. The other two are Pirate and Adventure.

Each room has a number of Lego models in the room to admire but not play with. Expensive if you break one. We didn’t so no worries there.

The elevator lobby has a woopie cushion built into the floor. You stand on it and a recording plays with the sound and some kid friendly, witty remark. The elevators themselves are themed as a Disco hall. As the doors close a disco ball lowers from the ceiling and music plays. We got Dancing Queen and YMCA that I can remembered. We were on the first floor so we only took the elevator to explore the other floors.

The buffet breakfast was the best by far. They even had a separate area for kids with some kid favorites. I did raid the kids area for Tater Tots. I don’t buy them for the house so they are a bit of a treat. The other treat was that they had chocolate milk ‘on tap’. I drank way too much of it each breakfast.

One of the advantages of staying at the hotel, beyond the fact that we didn’t have any distance to go to get to the park, is that hotel guests get in an hour early with access to six rides. Those six rides take just about an hour giving you a nice head start on the day.

Philip and Margaret both remember being here from seven years ago. Philip’s memories are quite good. Margaret has watched repeatedly a DVD slideshow we made of the last trip and her memories are from that DVD. She was only 2 that first trip. 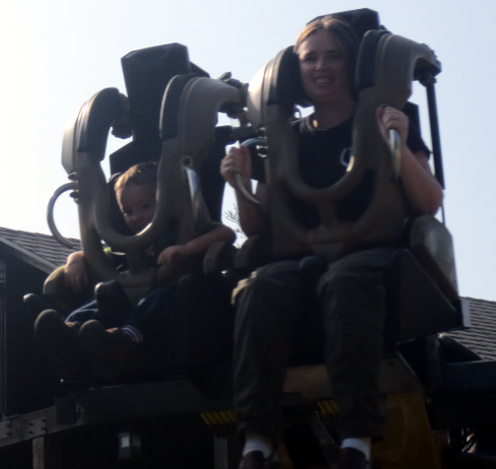 Ian is taking after mommy and the older kids in loving roller coasters. He loved both the CoasterSaurus and the Dragon. He also liked the Knight Tournament. The Knight Tournament is a ride where you are strapped into a seat at the end of what is effectively a robot arm like you see assembling cars. You can select the level from 1 to 5, restricted by height. It will twist, turn, spin and at higher settings turn you upside down. All of this is over water and last time you could spend a quarter and take a shot at the riders with a water cannon in the water below. I got people wet last time. This time the cannons were gone. My wife was happy about that as she was one of the people I got wet last time. 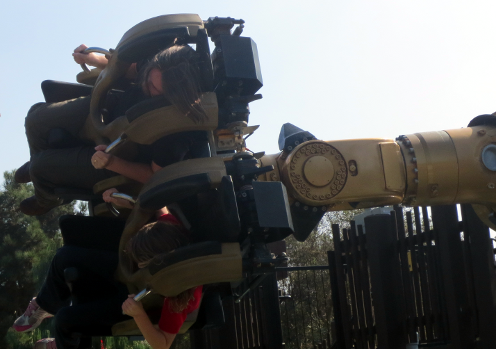 We got to most of the rides today but didn’t really look around a lot. We knew that the dinner buffet was going to be huge so the only thing we ate in the park was some Apple Fries. They were good but expensive for what they were. 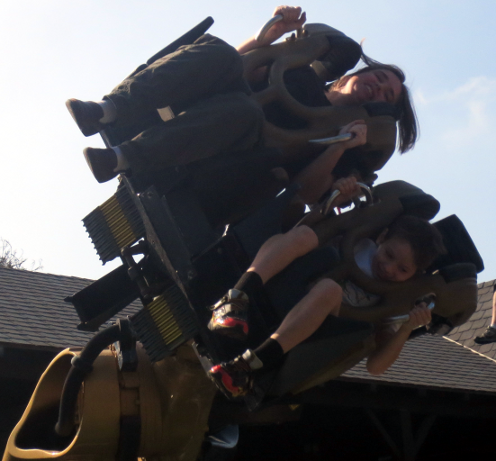 Philip’s favorite rides were the Project X, Dragon and Knight’s Tournament. Last time we were down the he was too short for Project X.

The end of the day had us walking back to our hotel and we stopped to view the largest Lego model in the world. It took 5,335,200 bricks, and 32 people 3 months to build. A life size X-wing. Amazing doesn’t cover it.

The buffet was everything we expected and more. In going back for seconds I ended up having two completely different meals. And again the kid’s area was full of kid’s favorites.

After dinner I walked down to an outlet mall to buy something to put all our laundry in so that the souvenirs would fit in the suitcases. My shoes that were on their last legs before we started were starting to be a problem so I was also looking for shoes. The luggage place switched tactics quickly when they realized our needs. They had a $30 stuff sack that he sells about 10 a week to people just like us. I also found Rockport shoes at about half the price I would have paid in Canada. I wore them back to the hotel.

One thought on “Our Southern California Vacation Day 8”