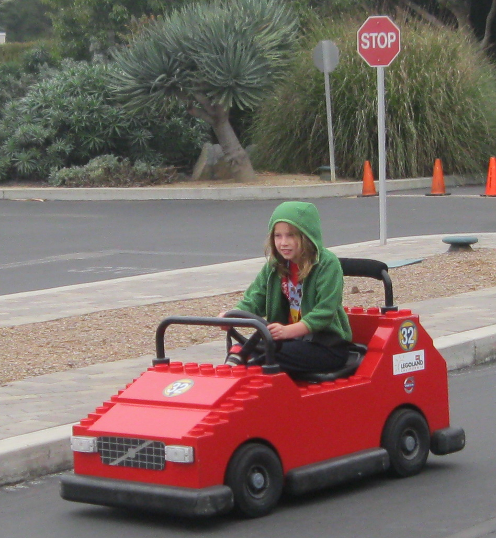 Our second day at Legoland was a special day called Brick or Treat. We had planned on being here for that day to the point that we made getting to our plane a little trickier. The park was a lot busier which is one of the reasons that we wanted to get on all the rides yesterday. With Brick or treat there are booths setup throughout the park and lots of special shows going on. It was worth attending but I am glad we got to most of the rides yesterday. Brick or Treat is more to be experienced than running to rides.

We got in an hour early again and did the same rides that we had access to. As soon as the rest of the park opened we went and booked the kids a time for the Lego Mindstorms.

We did have a couple of rides that he hadn’t made it to yesterday. A cool one was a two level building with air cannon that you could shoot balls out of. On the ground floor were tubes that would send the balls back up to the second floor. Ian had a great time with it but it was very loud.

We also redid the Driver’s Licence one. We had done it yesterday but the kids wanted to do it again. They get to drive little cars on roads. It is possible to bump in to each other, although you are not supposed to. They have stop signs and lanes. It was another ride that Philip remembered from last time. There are two areas based on age. Last time he was stuck on the smaller track this time he got to go on the larger one.

Legoland was also the only park were we saw carnival games. We had to have a talk with the kids about the odds of winning. If it cost you a dollar to play and you win every time then the price is worth maybe a quarter. If the prize is worth $10 they expect ~40 people to lose. It took explaining it a couple of times in slightly different ways and watching some people fail but they got it.

At one point in the day we explored Miniland. It is amazing what they can do with Lego. The Star Wars area was all new to us and there were other things that were either new or I didn’t remembered. It always makes me want to visit some of the area that it depicts. Challenge for those visiting, Find the guy sitting on the toilet.

The kids had a blast doing Lego MindStorms. They were given some instruction and then a series of four challenges. It was interesting to watch them tackle the problems with difference strategies. Margaret was more brute force and Philip repositioned at the start to simplify the problem. They have kits for homeschooling that we want to look at more.

Our snack today was Ice Cream. Can you go to a park and not have Ice cream at least one day? For me it is one of those food rituals that I talked about earlier.

We saw a short movie that Ian wanted to see called Chuck Powers. It was labelled as being 4d and I was curious what that meant. 4d means that it has some sort of special effects in the theater itself. In the case of Chuck Powers it was water sprayed at the audience and stage smoke.

At the end of the day we went through the Sea Life Aquarium. It was interesting but after Sea World it just didn’t measure up.

We went back to the hotel for dinner, which again was wonderful. Danielle and the kids went back in to the park to watch the fireworks and I decided to rest in the room. I actually got to see them anyways as they were visible through the window in our room.