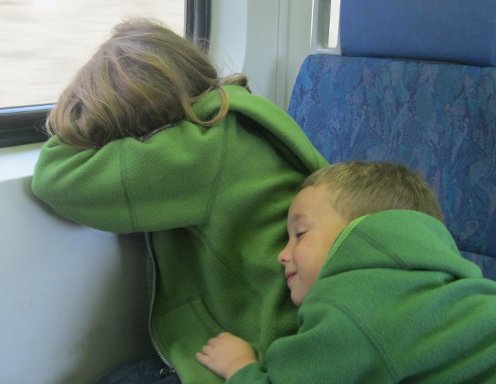 It has been a wonderful trip but it is time to head home. We started by having one last huge breakfast at the buffet and then a taxi to the Coaster train station. At the train station I couldn’t find any signs that said what side to board on and there are two sets of track. I asked someone and they say west side. I asked another and they said east. I got to 5 groups before we got consensus. Most days it is the east side but sometimes the train has to switch tracks and then it is the west. Given our tight schedule to get to the airport and the large number of bags we had this was an important question. It came on the east side and we got on with no problems.

We got to the airport with time to spare. Even more given that our flight was delayed by an hour because of snow in Calgary. We eventually got to Calgary and as expected it was snowing heavily. We cleared customs, got re-checked in and back through security. Dinner was at the little food court on the secure side of Calgary Airport. We got home and it was cold but no snow. Thus concluded our ‘Planes, Trains and Automobiles’ Day.

It is now almost a month since the actual trip and the kids are still talking about it. Of course they are also asking when we can go back. I would like to go back but flying is not an affordable option. That leaves a road trip but do I really want to drive in Southern California. There are a lot of other places that I would like to see down that way as well. I have always wanted to visit San Francisco. Maybe park somewhere near the train and use that to get into the cities.

I think the best testament to how much walking we did were Ian’s shoes. They were bought new just before we left for the sole purpose of making him 40” tall for the rides. As you can see they did not survive.