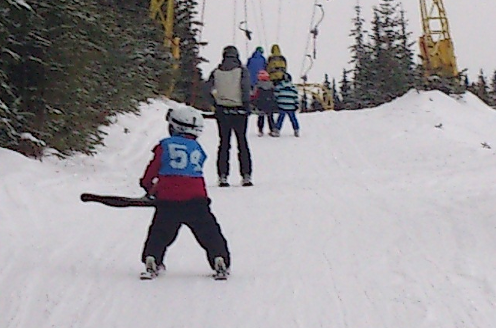 Christmas!!! We went up to my wife’s, uncle’s cabin for a week and had Christmas with the family. Thirteen people staying there and 17 for Christmas dinner. The big gift for this year was a Disney Infinity set for our Wii. Watching Ian open it was priceless. He has been asking for it over and over again for months. When I was growing up only one person was opening a gift at a time and we all took turns. My wife’s family tradition is more of a free for all. One person hands them out but as soon as you have it you can open it. It leaves less time for taking pictures. The only one that I really got pictures of was the Disney Infinity. 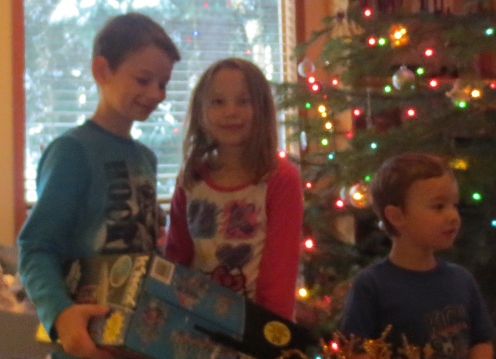 Christmas Eve mass was a tiny native church at the bottom of the ski hill. They are used to Christmas Eve guests from the mountain. It is a very welcoming community. At the end of mass on of the elders gets up and talks. This year he talked about some of the decoration in the church that they have made. My favorite was the Stations of the Cross which are deer skin stretched in stick frames with native pictograms. My wife liked the nativity scene that was made by a local artist.

He also talked about history. The first settler here was Father Pandosey, a Catholic missionary. The elder’s Grandfather knew Father Pandosy and was at his side when he passed away.

The cabin is also at a ski hill. So everyone but me got lots of skiing in. I got to catch up on my reading which was wonderful. The kids also did a ski camp for three days so my wife got to ski with her brother and various other adults rather than tracking kids across the hill.

One of the cool things was that Margaret got some watercolor art supplies and her uncle that paints watercolors gave her a lesson. I have spend some time since we got back trying to find some material for her to learn from. I found a couple of YouTube videos and have a DVD on hold at the library.

Our New Years was quiet with us sitting downstairs watching the ball drop in New York. In previous years we have watched at 9PM by watching the east coast feed but we no longer have those channels so we stayed up and watched it properly at midnight.

I have started to ease them back into to school on Thursday and Friday. We have done some fun things and some stuff that we were behind on. I did some experiments with light with Margaret. We traced the shape of light reflected from a convex and concave mirror. We also looked at shadows with one and two sources of light.

Next week we have to be right back at it. Portfolio time is coming up fast and I want to be more ready than last semester.

Up at the cabin the families take turns for breakfast and dinner. Lunch is always fend for yourself. I ended up with two breakfasts and two dinners. The breakfasts were a overnight breakfast bake and egg mcmuffins which are something that I make every time we are up there. The dinners were a pork roast over apple stuffing and a stir fry made out of the leftovers.

I finished reading ‘I am Malala’ I want to write a whole post on it but I feel that everyone should read it. Margaret is now reading it. She is about a third of the way through it.

I also finished reading ‘Dodger’ by Terry Pratchett. Again I really enjoyed it. I feel like it was a book that he has been waiting years to write. The book’s main character is based on Dodger from Oliver Twist.

The last book I read up at the cabin was ‘Steelheart’ by Brandon Sanderson. It is a young adult book and thus started out easy to read. The ending was excellent and not what I expected. It also left plenty of room for a sequel that is coming out in the fall.
Linking up at: