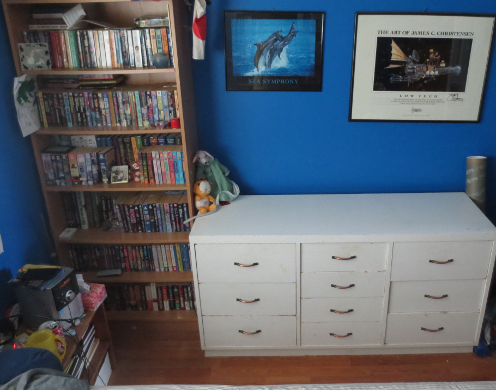 Last weekend was the year end for Philip’s Irish Dance studio. They do it at the local community theatre. They always put on a good show and this year was no exception. Philip is at the advanced beginners level but they go up to championship levels. We have some that have competed at the national level and one at worlds.

I have gone four days without playing Candy Crush. I know it sounds silly but it was taking over. I used to read at night but I was playing Candy Crush instead. This week I just completely lost interest in it one day and decided to embrace and encourage that feeling

My wife finished off her dresser and side of the bed. It has made a huge difference. She got rid of another bag to donate, a full recycling bin and a bag of garbage. She commented the other day that it was nice to be able to find the book that she was reading.

I spent that day rearranging and purging three book shelves, one of which is now empty. I need to do some more down there before I am going to  be willing to get rid of any shelving. My plans keep changing. I did fill two boxes with books to donate and half a recycling bin.

This week I started tackling the craft room. It is going to take a couple of days and probably some input from my wife. We have a lot of raw material, too much probably. I have purged some but there is a lot more and it is all in bins. Basically I dealt with the stuff on the floor and desks. The boxes that are under the table are from the bathroom that is still missing its vanity. It arrived today complete with a forklift hole in one side. A new one is on order, arrival date unknown.

I did write a very long post talking about how I came to be on this minimalist journey and because they are somewhat intertwined my journey to being a SAHD and my wife’s debt freedom journey.

AHHHHHHHHHHHHHH!!!!!!!!!!!!! One week to go until my deadline for the kids and two weeks until I have to have the portfolios in. Philip has pulled himself out of the fire and is now relatively safe in the frying pan. I would like to see a little more detail in Margaret’s essay on Residential Schools. I also need to start preparing the portfolios and getting them online. Two more weeks until I can relax and run out the clock.

Ian describing how to make a capital ‘R’.
First you draw a line. Then you make it a ‘P’ and then you add a ‘K’.

One of the concerns about global warming is sea level rise. There have been a number of studies over the years but the one that is currently accepted is the 2010 US National Research Council report. It takes in to account the expansion of the ocean water due to heating as well as the current projections for melt from Greenland and Antarctica. They have the sea level rise by 2100 as between 22 and 79 inches. That is about half a meter to two meters. There is a mapping tool that allows you to see want various sea level changes would look like. The effect of that would be pretty wide ranging so rather than try to list them I’m going to send you to Wikipedia.

This video was on our local news and happened at a nearby university. These birds figured out how to trigger the sensor to open the door to were their nest was.