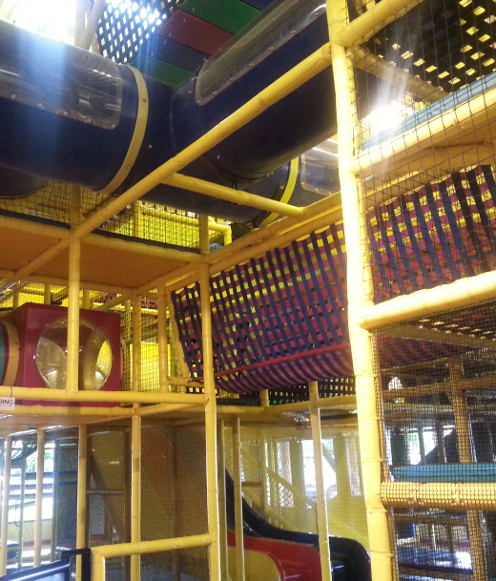 Well I missed a week. Life just got to busy to write but it was full of good things. I titled this post Decompression because it really feels like it after the end of the year stress.

We started our decompression by visiting a local place called EnergyPlex. I had been promising the kids that I would take them on a field trip there all year. The only problem that I had was that I was planning on taking advantage of the fact that we homeschool and that there wouldn’t be many kids there but our public school teachers went on strike and thus everyone was out. It turned out that it still wasn’t too busy but certainly more than it would have been.

The kids had a blast. There are a number of different areas. The first we visited was for gymnastics so they had a foam pit for the kids to jump in along with trampolines, rope swings and an inflatable climbing structure/race course. As you can see the kids got adventurous on their jumps in to the pit.

The second area was the giant tube structure. The kids love play hide and seek or tag in there. There are a number of slides that come out of the structure including one from the very top that is completely dark that the kids nicknamed the black hole.

The third area was the climbing wall. I think they were getting tired by this point as none of them climbed as high as I have seen them go before. After this we went back to the gymnastic area and jumped in the pit a few more time and went home.

Later in the week we met up with some friends of ours at the local water park. I didn’t take any pictures there. It is basically a place for kids to run through various water features and there is one small slide. We spent about two hours there.

This week also had a fundraiser for our local diocese retreat house. My wife and Margaret are part of an Irish band that provided the entertainment. The main part of the fundraiser is a charity auction. I don’t know if it didn’t have as many good items this year or my new minimalist leaning made everything look like excess but we only bid on one item and that we won. Yay a new pair of pillows. It was a good night and as always good food.

My mother arrived for a visit the second week. This is a good part of why I didn’t get a post written last week. We went for a walk at a local park that is also a historical site. It was one of the early farms in the valley. They grew and cross-bred a variety of nut trees both to harvest and to sell young trees. It was interesting to read the history of the place.

We also got to watch the wedding photos of two women who had wed. It was interesting as they were both wearing the white dresses. There were a lot of bridesmaid but not a lot of guys. Both dads were there and they were easy to spot but I couldn’t spot either mothers.

We ate out one night with my mother, step-father, bother and his wife with the kids but we also did it once with leaving the kids at home. Philip had the babysitting course last summer but most of the time home alone has been short while I ran errands. I was great to have a dinner out without kids and without having to arrange babysitting.

My mother is now on her way home and she has taken Philip with her for a visit. He will stay with her for the next two weeks and then she will fly him home. He will have a great time with her. She has lots of activities planned for him and she has great knowledge of wildlife, nature and that sort of thing.

We purged some toys this week and a whole pile of puzzles. The puzzles almost filled my trunk and the toys filled two large boxes. I need to plan a project for next week. The good news is that the kids are getting the concept that the less stuff that they have the less cleaning they have to do.

Absolutely nothing! We have started to receive our marks for the last term and thus the year. The grades are online and thus I can watch as she enters them and the comments. She is almost done marking Margaret’s portfolio so hopefully by Monday or Tuesday we will have them all.

A long time ago I liked to do Origami and a lot of the first romantic gift to, at that point wife to be, were origami animal and flowers. Recently I was reacquainted with the art and learned that the instructions are on YouTube. This makes it much easier to do some of the harder models. I have done a number of relatively simple ones in that last week.

2 thoughts on “Weekly Wrap up: Decompression”