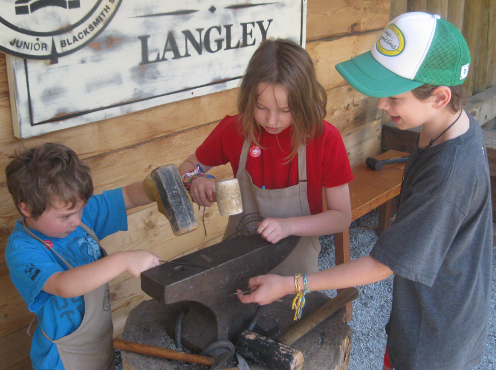 We picked the kids up from camp on Monday. We had gone down on Sunday and camped closer to where they were. The kids had a wonderful time at their camp. Margaret’s favorite thing was the rock climbing. Philip’s was the high ropes course.

After we picked them up we did an early field trip and headed to Fort Langley. The fort dates to the fur trade and was where we became British Columbia. It was here that the proclamation was read declaring British rule over the area. It is a very hands on place so we got to do barrel making, carry bales and metal work.

The blacksmith demonstration was lots of fun and instructive. At the end they give away the item that they were making. The first person staying in character asked for a trade. Margaret offered one of her friendship bracelets from her previous camp but the person turned it in to a trivia question. She went back a total of five time and watched the demonstration, each time with a different person. On the last one of the day the fellow accepted her trade. I congratulated her on her persistence and explained how that attitude would server her well.

One of the cool things was a demonstration of musket firing. New, they had a 30% failure rate and sure enough they had trouble getting one to fire. I also managed to get a really cool shot.

On the way home we stop to see some tunnels that used to be part of the Kettle Valley Railway. I like how our modern tunnels are smooth concrete and these are very rough cut. You can see from the photo just how hard the terrain was to get a track through. They had to keep it to a 2.5% grade.

I started cleaning these shelves off while the kids were away. The kids at one point were using a stuff things anywhere method off cleaning. I found two useable but crushed Kleenex boxes hiding in the back. I dealt with the easy to see stuff that I either want to keep or donate. That left the boxes that the kids had shoved stuff into.

Sometime this weekend I am taking down those shelves before something gets put on them.

I made some wonderful cookies. I got the idea from Pinterest but the idea was simple for I used my own recipe for sugar cookies and winged it from there. Basically it is sugar cookies rolled out and then had butter, brown sugar and cinnamon applied and then rolled back up. You then cut them in to about 1/2 inch rounds and cook. YUMMY!

The weather did improve and rain did come. The fire closest to use is 100% contained and nobody lost their house. Else where around us is similar containment. When they are no longer making the news we can relax a little. Two houses were lost farther south in the valley. The large fire in Washington State is in the same valley as we are they are doing better as well with 55% containment. However they lost 300 houses and it is still a dangerous fire.