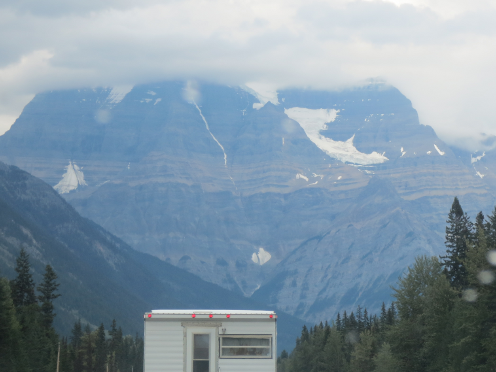 We have spent the last week camping in the Canadian Rocky Mountains so instead of a weekly wrap up you get Day 1 of our trip. I will be writing posts for each of the days we were away and hopefully posting them daily.

The first day was our drive from Kelowna, BC to Jasper, AB which is an 8 hour drive with a stop for food it became 9. We stopped in a town called Valemount for dinner. It turned out to be the same place we stopped at years ago on another trip, good food but does not look like it from the outside. For the first time in years I sat in a restaurant and had no cell coverage. I knew that I wouldn’t have any over most of our route it is just too far from civilization but I expected to have coverage in town.

You know you have left civilization when you no longer have cell coverage.

Crossing one of the high mountain plateaus we were behind very tall RV being towed by a truck. (Not the one above) A storm was rolling in and giving us a brutal cross wind. It was buffeting me around but I watched him just about jackknife twice before we got off the top and in to the trees and shelter. Now keep in mind there was no cell coverage. If he had crashed I would have dropped off my wife with our emergency kit and after a quick assessment driven back into Valemount to get aid.

Just outside Jasper National park we spotted a mamma bear and her cub on the side of the road. They were the only ones that we saw and that is probably for the best.

The picture above is of Mount Robson. It is the tallest in the Canadian Rockies and one of the most photographed. As you can see in is easily visible from the road.

We got to the campground at about the time that I expected other that I forgot that we were crossing a time zone. We were meeting up with friends that had been at a family reunion in Alberta. They pulled in about half an hour after we did. The campground is huge with 500 campsites.

As we registered we got the bear aware speech. We were already well aware of it but they need to make sure that everyone does. Basically it means no food or anything that smell like food left in the campsite while you are out. Also absolutely no food in the tent. Given that we had fresh bear poop in the next site over it was just that much more important.

In the evening I took the kids to the play park after recruiting one of the teens to help me herd the six kids. The map had the roads on it and the ‘official’ trails but not all the little ones. I took us 30 minutes of wandering to find the park. Once we knew our way around it was only a 5 minute walk. Still the kids had fun and it allowed the other adults to get things done without kids underfoot.

Tomorrow I will post our first full day in the park and the only full day that we had with our friends. Just as a preview/teaser here is a picture of one of the places we went.