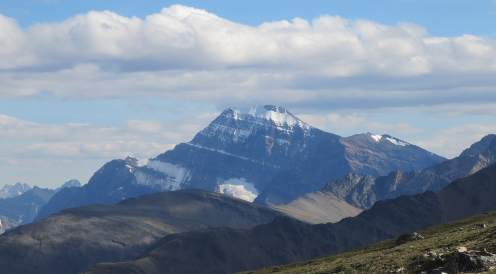 Today was the only full day that we had with our friends so we spent the whole day with them. They really wanted to go up the Gondola and that was on our list as well. First we needed to go into Jasper to buy some things.

We took the opportunity to explore the town as well. The last time I was here was in the 70s and there was a cartoonish bear sculpture that I remembered. I asked and it had been vandalized years ago, repaired and moved to the Gondola which was where we were heading next. They had made a new one out of concrete, the original was fibreglass. So we got pictures with the new bear.

We also went into the information center to plan the rest of our week and check out the gift shop. Outside I found the strangest golf rule I have ever seen.

If there is a bear on your fairway do not play past it.

The was also an interpretive center in an old fire station. We were there for about an hour playing around. There were animal displays and videos including some on bears and how to act around them. The kids dressed up as voyageurs which considering the fur trade is on the menu this year for school makes this a bit of a field trip. Actually we did a fair amount of schooling.

We did a little bit of touring the town and looking in the shops. Most were aimed at tourists with prices to match but it was still fun.

Our next stop was the gondola. We had been told it was about a 10 minute wait. It turned out to be an hour and a half. They had missed one key fact that we could buy tickets in town and by the time we drove up it would be about time. We ended up sitting around and talking. I showed the two teens a mobius strip and we got talking about the Fibonacci Sequence. Eventually it was our turn. We also got our pictures with the old Jasper bear.

The Gondola takes 7 minutes to climb to the upper station and gains 973 meters (3192 feet) in elevation. The upper station is at 2277 meters (7470 feet). We hiked up to the first summit. The actual summit would have involved going down and back up two times to reach and we were not prepared to do that particularly with two smaller kids. The summit is 200 meter (656 feet) elevation gain over the upper station and we probably did 150 (492 feet) to the first summit. As you can see the views from up there are stunning.

I took pictures of the rocks to show the layers. This is shale that used to be at the bottom of an ocean and is now on top of a mountain. Later in the trip we get to see a fossil of sea creatures in the rock on a trail.

Up here we are in the alpine, thus the lack of trees. It also meant that it was far colder that it was lower down. We did have coats with us a plenty of water. As you can see the trail is quite steep and I was huffing by the top.

The jog down was worse though. Inertia is not my friend. I ended up in a light jog and leaning back to keep my footing. Once I go going there was no way I was stopping until I got to a flat section thus the trip down took far less time than the hike up. My knees did pay a price for it though.

After dinner there was a presentation in the campground of Native, Metis, and early settler music and dancing. We quite enjoyed it and it was interesting to hear the differences in the music and also the influences the groups had on each other. Towards the end they had us up and dancing which meant me dancing badly with my daughter. My two sons danced with two of the girls from the other family, they have five daughters.