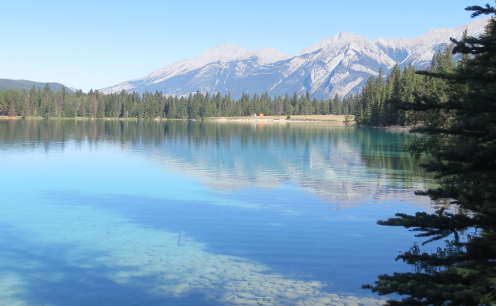 Not much happened this week. We don’t go back to school until September and we mostly got caught up on errands. So I am going to use another day from our trip as my weekly wrap up.

Today we finally got our flat trail. This is the trail that Margaret picked out and had to do with the books they hand out to the kids in the parks. We found them useful as well good for the kids. One of the activities from tomorrow we may have missed without the book.

The morning was quite chilly and we all went with long pants. By the middle of the day it was quite hot and we were baking.

On the drive to the trail we saw a mother elk and her young one wading in the Athabasca River. Cool but we didn’t get any pictures of them. Later in the day we would get pictures.

The trail as promised was flat and a nice change from the previous two days. We did see some woodpecker holes in some of the trees. We also saw a couple of chipmunks. The ones on the trail were nearly impossible to get a photo of they were so skittish. The squirrel back at the parking lots where we had lunch knew that humans meant food. He practically posed for us. Round trip on the trail would have been about 4 km but linked up to a loop around Annette Lake making out total about 6 km.

Lake Annette is a glacier lake in bowl carved out by ice a long long time ago. As you can see the water is very clear. The lake isn’t as cold as the river but it still pretty cold. There were people swimming and due to our miscalculation of the temperature the kids wanted to wade in. They were told not to get their clothes wet. Do you think that worked?

We went back to the campground and after getting changed into more appropriate clothes for the heat, we went to do some geocaching. The campground has GPS units to lend and a sheet with six locations. We should have done more planning and used a map to guess the locations. The first location was back near the front gate but the second was within sight of our tent. With the rules of staying to the trails it was difficult to just walk while the numbers got smaller. There were to many things we had to go around. We ended up using the GPS tomorrow on our hike with great success.

I ended up giving up as they tried to cross a creek on a log and I could picture myself wet and bruised from falling off the log. After I left they went around a corner and came face to face with an elk. They were well within the danger zone but this one completely ignored them. The white thing barely visible around her neck is a radio collar.

After dinner there was another Kids Explorer program. This time it was using your five senses to explore the park. They had to identify objects using different senses. For touch it was horns, a grizzly claw, coyote foot and cottonwood fluff. For sight it was pictures or different places. Hearing was identifying birds by their song. Smell was sage, fir needles, and wild rose oil. Taste was strawberry jam and rose hip jam. That is a good part of the kindergarten science for term one. I intend to repeat it with household items that Ian has a greater chance of guessing on his own.

The funny bit for the day was the kids actually liking washing the dishes. I know this can’t last but it is fun while it lasts. Of course I’m not sure everything got clean to my standards.