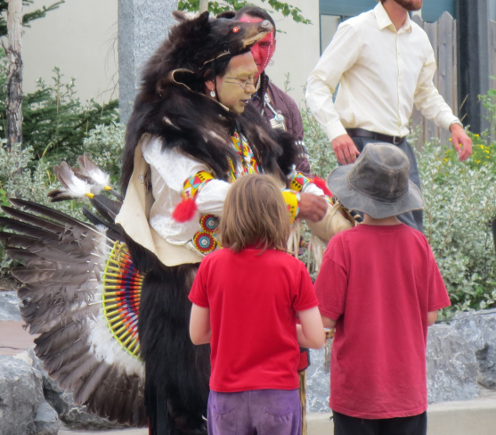 This day was not part of our original plan for the trip. We decided to add two more days to the trip when my wife was able to get the extra days off work. It meant that we (I) planned it on my cell phone. It also meant the very nice hike I planned ended up leading us back to our own campground. There are hoodoos and I wanted to show them to kids since they are cool and fit in with our subjects for the year.

The problem was that the view point was across the street from our campground. We had missed the signs to it on the way up since we were looking for the campground and going back in to town it isn’t marked. It was still a good hike just a little pointless.

We figured it out when we ran into someone coming down and in asking him how much further it was he had skipped them in hiking from the campground into town. I got out my smart phone and turned on the GPS and satellite view on Google Maps. The trail was obvious and so was where are campground was. We turned around and visited the Hoodoos the next day.

We had our lunch on the trail and headed into town. There is and ice cream place there called Cows. It originated in PEI but has spread. The have excellent ice cream and funny cows based T-shirts.

While in town there was a performance by some local natives with story telling and music. At the end Philip and Margaret in fine homeschooling tradition went up and asked what the native solution to mosquitoes was. The answer was that they burned sage brush and wafted the smoke around.

After exploring the town we went to a hot spring called Cave and Basin. This is a historical site and the First Canadian National park. It meant that there was no going in the water or even touching it. The water is home to an endangered snail that is being protected. The building was originally a hotel/spa and is part of the history of the site. Ian hated the smell of the sulphur and held his nose every time he could smell it.

Dinner tonight was hot dogs cooked over the fire and banana boat also cooked with the fire. It would have been better if it hadn’t been pouring. Fortunately we were able to reach the fire from under our tarp. After dinner the kids went to a kids presentation and I stayed and watched the rain put out the fire.

The presentation was about the wildlife overpasses and underpasses. The kids got to take part, Ian and Margaret were a pair of wolves called Yip and Yap, Philip was golfer and got to yell “FORE”. They said that Ian was the most enthusiastic wolf of the season.

There are six animal overpasses over the highway and 38 underpasses. To determine where to put them they mapped where the animals were crossing. They also put a lot of work into how they looked to the animals that used them.