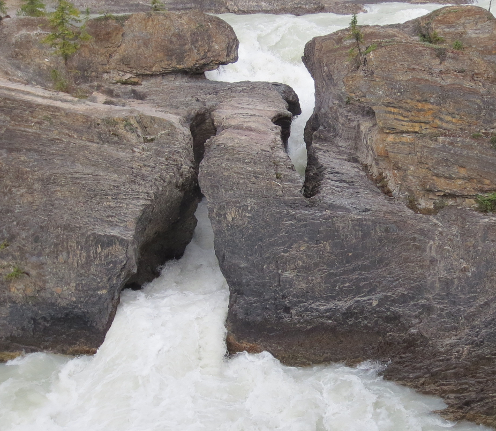 Our time is up and it is time for our drive home. It is only a six hour drive so we are in no hurry to get home. I find it is always different going home. Going there I want to get there and setup. On the way home I know we have warm beds waiting for us no matter what time we get in.

The first stop of course had to be the hoodoos (Wikipedia) that we had missed from yesterday. Hoodoos are spires of rock where there is a harder to erode rock on top of softer rock. The kids found them fascinating.

We stopped in Yoho National Park as we drove through it and decided that we need to plan a camping trip there in the near future. We drove into the town that that the visitor center is in looking for food and decided that there were more people currently at the visitor center than live in the town. I want to explore the town on foot as there were a number of historic buildings but the kids were hungry.

The visitor center had a display of fossils from the Burgess shale. I didn’t know that we were that close to them. The hikes are a little beyond Ian at this point so that will probably factor into when we come back camping. Still it was cool to see some although not as cool as the ones that we saw still in place back in Jasper.

Another display was a black bear named Jake. Jake developed a taste for human food, garbage cans, coolers etcetera. He was trapped or tranquilized five times and moved back in to the wilderness. Each time he returned to towns. Two of the releases were what they call ‘hard’ releases where they yell, fire blanks and noise makers at the bear to hopeful give them a fear of humans. Unfortunately it didn’t work, he returned again and had to be put down. This why they are so strict on the food being left out in the campgrounds. It is far more dangerous for the bear to develop a taste for human food than the bear is to us.

After lunch we stopped at a natural rock bridge. I have seen these in a couple of places but it is still cool to see again. You could walk across and we saw some people doing that but at the current water levels a fall would almost certainly be fatal. The kids had to go test the temperature again. This one is also glacier fed, although I’m not sure from which one, and thus is quite cold.

We also stopped at an old growth rain forest. It is the only one in BC that is away from the coast. The cedar trees are gigantic. It is a striking difference from the lodge pole pines of yesterday with a lot more green plants surrounding the trees.

We drove the rest of the way home stopping for dinner about an hour north of home. We got in just before dark.