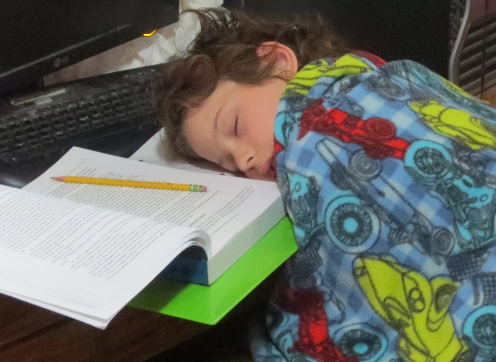 Our week started with our local Catholic Family Camp. Families from all over the diocese gather and camp for two nights. It is very well organized and we get to go to talks. There is one for the men, the women, the teens and the tweens. One parent watches the kids while the other is in the talk. The speaker this year was good as usual. Below is a video that he shared with us.

There is also lots of physical activities. My favorite along with my kids is the water slide. I love seeing how big of a splash I can make when I hit the run-out area. Of course there was also plenty of time to reconnect with people and I had some great conversations.

Unfortunately I also acquired a nasty cold. Packing up on Sunday was not fun. When we got home I parked myself in front of the TV wrapped in a warm blanket and watched ‘Doctor Who’. I basically slept through Monday and a good part of Tuesday. The kids did get some school work done but Philip wasn’t feeling a 100% either, thus the sleeping photo. He was there for at least an hour as I fell back to sleep and he hadn’t moved when I woke back up.

On the strike front there is still no movement and 500,000 kids are not in school because of it. I did talk to one parent this week that is seriously considering homeschooling. I sent her our local laws and how to get started.

I am behind on my 40 bag in 40 days challenge due to being sick and the weekend away. I did get two areas done. The first being the top of my dresser. It wasn’t as bad as it looked once I started pulling stuff off but I did get rid of some things from up there including the globe without a stand.

The second area was my side of the bed in general. Again it really wasn’t all that bad. Most of what needed to go was recycling. The rest was garbage. I did make about 3 dollars sweeping up all the change.

We are starting to get into a routine but we need to ease up in some areas to allow more time for the others. It is a work in progress. Grandma has been doing reader theatre with them. The first week was a too simple so this week they have been practising ‘Apollo 11’

English is always Philip’s least favorite subject and getting him to write anything down is a huge chore. The picture is from when he was trying to to his ‘Writing with Skill’ assignment.

Ian is plowing through his subjects. We are up to lesson 25 in Rightstart Math, and about half way through level A in Raz-Kids. I started talking to him and showing about forces, he already knew most of it. It was his sources that were slightly concerning. “Oh I know, that’s friction. I learned about that on ‘Science of Stupid / Mythbusters.” I did have to correct a few misunderstanding but for the most part he understood it. He also understands gravity which he demonstrated by jumping off the couch.

My wife held her first choir meet-up and it went well. We had a dozen plus kids in our not very big living room. The kids had a lot of fun and I’m sure they learned some things.

My prayer list is the same as last week. The one from the car crash is doing much better and has been transferred to a rehabilitation hospital. Unfortunately one of the cancer kids has been put on hospice, there is nothing medically left they can do. Please pray for his family as well they don’t have much time left with him.

7 thoughts on “Weekly Wrap up: Routine, What Routine?”