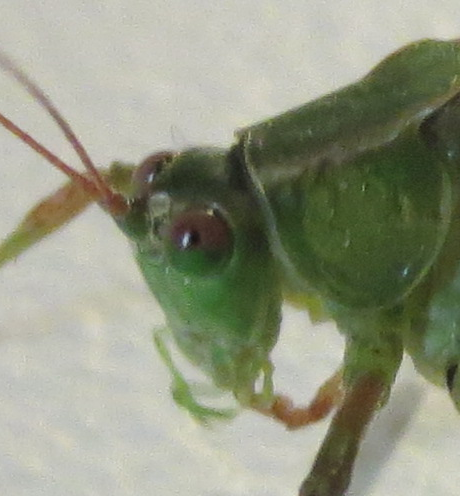 Last Saturday we finally had a kids party for Margaret’s birthday. Her actually birthday was back in July. She decided to have it at the Y gym. They did a great job and they had a lot of fun. For the first time in years I didn’t make the cake. She wanted an ice cream cake from Dairy Queen. 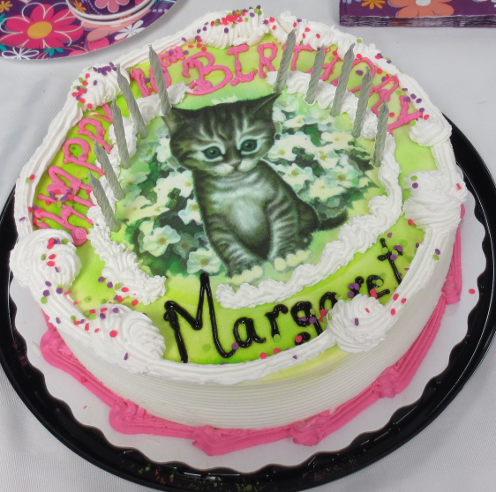 Earlier in the day we went to our church’s Fall Bazaar. The big event for the kids is the cake walk. Some of the walks are a quarter and are for cup cakes. The rest are a dollar and are for the cakes. I made two cakes this year. Of course my kids were aiming for my cakes and they won one back. Next year I am going to make the same cakes but instead of a 13.5×9.5 inch pan I am going to use two 8×8. That way the church can make a little bit more money and if I win one back it isn’t so much cake.

We had a grasshopper decide to visit the inside of our house. After taking a few close-ups I caught him in a container and released him into our backyard.

I have started tackling the boxes under the stairs. These all moved with us four years ago. Some contain memorabilia that none of us are ready to part with but most contain stuff we no longer need or papers of all sorts. When I started I couldn’t take a photo as there was no place to stand. Now I am down to the point that I can stand in there and count the remaining boxes, 13. One of the cool boxes contains paper cranes.

My marriage proposal consisted of a thousand paper cranes and the wish that those represent. We used them as decorations at our reception. I am going to restring them vertically as they will fit together that way and I will be able to hang them in a small space.

I also tackled my junk drawer. As you can see it had returned to the state that it was in last year. I feel like I am circling around but also spiralling in, every time around is a little easier. Most of it went to the work bench and that room is my next target. I did still get a bag worth of stuff gone.

We are starting to see some results in the projects that they are working on. Philip is writing a report on the Babylonian Empire with a time-line. Margaret is doing a report on the building of the Canadian Pacific Railway with a time-line and a photo mosaic. We have a picture of Margaret at the location of the last spike which is about two hours north of here. I have to dig it up on my computer this week.

Ian built a beaver lodge in Beavers. I though it was an excellent accompaniment to our research on beavers. He also showed retention on some of the information that we had talked about by drawing an underwater entrance to the lodge.

From last week I got thinking about sense of scale with me saying that Spokane was ‘Only’ 6 hours away. It leads me to the question: If you were going to go away for a long weekend, maybe adding a day to that, how far would you be willing to drive?

For us it is six or seven hours. That gets us to four big cities: Vancouver, Calgary, Spokane and barely Seattle. There is not a lot on the drive to those either. Out city has a population of about 200,000 when you count in the surrounding towns. While there is plenty to do here particularly if you like the outdoors there are somethings that we need to travel to find.

The boy that I told you a couple of weeks ago was put on hospice, passed away Friday morning. His family is heartbroken and in need of prayers. He has two younger siblings that are not equipped to handle his passing. He has four friends that were at his side every minute they could be. I don’t have words to express how amazing those young men are. Please pray for them as they journey through the grieving process. I know from Philip’s journey how difficult it can for children to grieve for a friend.