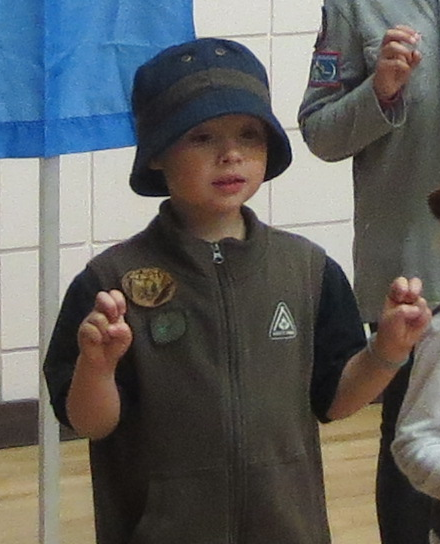 It has been a bust week. Philip went on another scout camp. This one was called Jamboree on the Air (JATO) and involved all the local groups and they could talk to other groups via ham radio. They also got to shoot black powder guns. One of the scouters is involved with the local black powder club and the jamboree is held at their shooting range.

While Philip got to go camping the rest of use had to go do our share of splitting wood for the ski cabin. It was a long day but we had use of a hydralic splitter so that made things go fast. We treated the kids and myself by stopping for ice cream on the way back.

Ian has been in Beavers since the start of the school year. Thursday night was Investiture. So he got his beaver tail, necker and woggle, along with a pile of badges that need to be sewn on.

Didn’t happen this week. I just barely kept my head above water on keeping things clean.

We started out last Friday with a meet-up at out local museum to have a school presentation on local small animals. It was a fairly large group and very knowledgeable. She would ask each time if anyone knew what animal she had. The kids got even the tough ones. She then would pass them around. We had to be gentle as some where starting to lose their fur. Still it was a wonderful opportunity and the kids learned a lot.

On Sunday we went on a geology hike with a professor from our local university. He was very knowledgeable and I wish I had taken notes but I wouldn’t have been able to write fast enough. The first picture is a local mountain called layer cake and it is a volcanic formation of a rock called Dacite. The layering is from the way it cooled not repeated flows.

The next picture is of a overhang. He had an engineer friend take a quick look. He said he wouldn’t want to hang around underneath it without a better look but that it looked fairly stable. He also said if he was building a road under it it would be the first thing blasted off. I am glad this is a park.