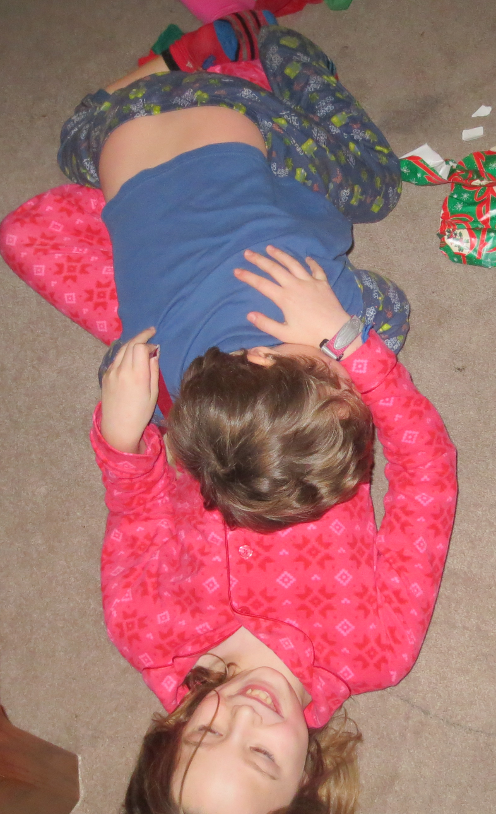 We had a small family Christmas this year with the present opening just being immediate family. The presents were also kept small this year and were mostly virtual. Philip and Ian both got Minecraft for their computers. Margaret got a note good for a shopping trip for camping gear. They also got a gift card to buy Doctor Who on out new Apple TV. My wife and I’s present for each other was a new TV and sound bar for upstairs. We really like the sound bar as it has Bluetooth and we can pipe music from our phones to it.

For New Year we invited friends over for the evening and had appetizers. I got creative partially do to a Jamie Oliver marathon on Food Channel and because of Pinterest but I’ll talk about the food down in that section. With kids over we celebrated New York New Year at 9pm. Our friends had brought over bubble wrap to go outside and jump up and down on. The kids really liked that. They also brought over a Yule log that I had never tried, perogies, meatballs and some dessert that I can’t remember the name of but was yummy.

On New Year day the family went up to my wife’s uncle’s cabin for four days to ski. I came down with a bit of the flu and stayed home. I watched three seasons of Doctor Who. For those of you familiar with Doctor Who do you have any idea how hard it is to sleep in an empty house after watching Weeping Angels and how many lights you need to leave on…

On the skiing front we have decided not to buy season passes for downhilling this year so they spent their time doing cross-country. They still had a good time.

We had record breaking snow for the first two days of school. It caused the first school cancellations in our district in 35 years. We broke a record set in 1932. My wife’s work even called a snow day. The roads simply where too dangerous or outright impassible. The picture show the depth after 24 hours. It continued for another 36 hours. The second day school was cancelled there was no new snow but it was still to dangerous around the schools.

I am planning on starting back up this week.

We have started back at school although with a slow start. Margaret was sick Monday and Tuesday although she did read all of “The Lion, the Witch and the Wardrobe” on Tuesday. Philip is as always catching up although we had a breakthrough on math at the end of the week. Ian has finished RightStart Math Level A and we will be starting B on Monday.

We have decided to switch math curriculum for Philip at the end of this semester and for Margaret next year. Both will be doing the appropriate level of RightStart Math. Now I just have to wait for them to arrive.

Margaret finished “Allegiant”, “The Lion, the Witch and the Wardrobe” and is currently reading the “Magician’s Nephew”

Philip has read “The Giver” and is currently reading “Gathering Blue”

I am reading “Red Hood’s Revenge”

I made a Squash and Apple soup that I heavily modified to try to match one that I had had elsewhere. I got close but it needed to be more thoroughly blended and thinner. I also used turkey stock instead of vegetable and it altered the color.

I made a baked crab dip that disappeared very quickly. I will be making this one again. If fact I think it is now almost a requirement when these friends come over.

I tried my hand at a Thai Salad. The dressing was good but I was glad that I only put in one chile.

I also made Gnudi which is a sort of pastaless ravioli. It was good but I’m not sure good enough to be repeated. Certainly I will not do it as an appetizer again, maybe as a main dish and the only thing I am cooking.

One thought on “Weekly Wrap up: Back to School”