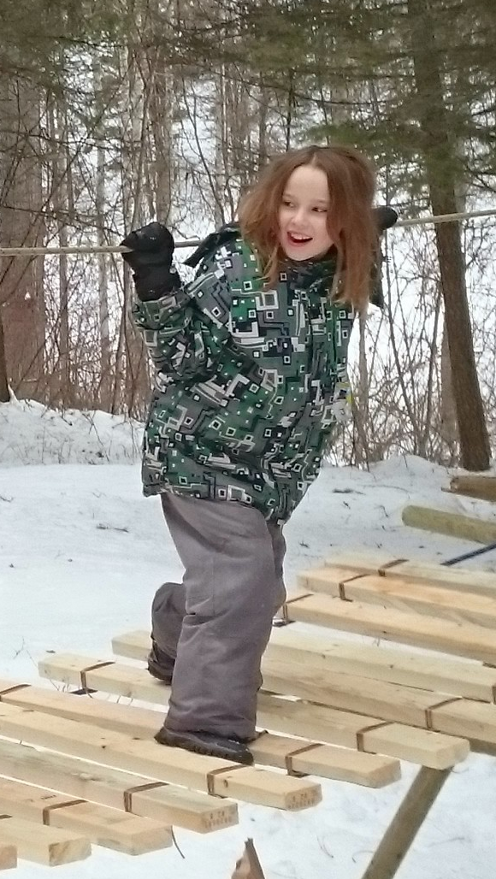 I missed another week but really not much happened the first week.

Last weekend the kids and my wife went to a scouting camp called Winter Link where all the age groups get to interact. The younger kids were in wood stove heated cabins but the older kids were in tents. It meant that I got a weekend of peace and quiet. They are rare and treasured.

The older kids made a rope bridge which the younger kids also got to cross. One of these days I need to get myself set up on YouTube. Ian is singing the Indiana Jones theme music as he crosses.

My wife being a computer programmer has a tarp on which she has taped out a sorting algorithm. You give each kid a number, randomize them and then have them walk step by step through the algorithm and they come out sorted.

The kids also got to go to a local hockey game with the scouts. My wife has now volunteered to be a leader for Margaret’s cub pack so she got to go as well. I could have gone as well but another quiet evening won out.

On Tuesday we went to a Live showing of Stuart Mclean and the Vinyl Cafe. He is a Canadian storyteller / comedian. He was great and interact far more with the crowd than I expected. The show was stolen by a autistic girl that he picked to come on stage to help him out. She knew his stories inside out and backwards . When she was asked for her favorite she told him and he did part of it with her acting it out. The funniest part was her describing her dog that she said was in the theatre. We all, including Stuart, assumed she was talking about a stuffy but he was her service dog. When she was asked why she needed a service dog she said because sometimes she ‘Bolts’ and is normally tethered to the 120lb dog. I sure the dog serves other purposes as well and is probably a calming influence on her.

Our craft room had become a dumping ground. The minimizing has had a real effect but the craft room is always going to be a battle. I didn’t take any pictures but it was pretty bad.

Portfolios are due Feb 15th so we have one week left. As you can see Margaret is doing just fine.

Philip on the other hand is at his usual last minute sprint for the finish.

Ian is on track. I just have trouble remembering what we have done as we tend to jump around and cover random things that he wants to talk about. For example he was trying to figure out why we had different time zones. I have bought a wall map of Canada and it has time zones that the older two were talking about. I got out the globe and demonstrated the day night cycle which he has seen before. He instantly got it, he just hadn’t connect the pieces.

We also recorded Margaret’s Presentation on the regions of Canada. I took a still shot as I was having trouble getting the colors on the screen to not be a blob of white.

Philip is reading “Zoom: How Everything Moves”

Margaret is currently reading “Dear Canada: Orphan at my Doorstep” and a couple of books in the “Emma Dilemma” series.

With the Superbowl last Sunday I did football snacks for dinner. We did the crab dip from the other week and honey garlic wings that worked out wonderfully. I also did these cream cheese, sausage and Bisquick things. At first they taste great but they were so greasy that nobody ate more than two and they just are not getting eaten. There were some other things that I was planning but I ran out of time.