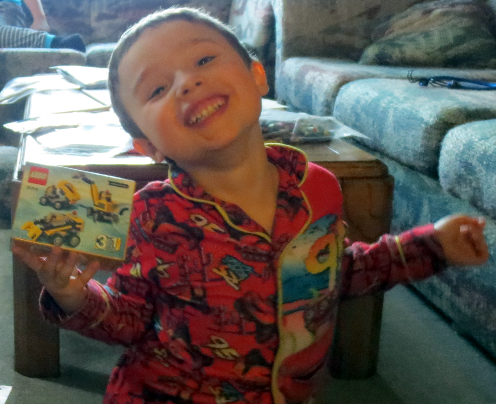 Another two week catch up post. First up, Easter. The kids got up before the Easter Bunny arrived. We had to send Ian downstairs while Danielle quickly scattered hid the chocolate. No pictures, the living room was a disaster, the kids were barely dressed and we went back to bed. The kids had chocolate for breakfast. The rest of Easter was more traditional. We attended all our church services and had a wonderful Easter dinner of turkey with family.

We finally got around to having Ian’s birthday party, it was back in January but we are always so busy. He had a PJ party with pin the pyjamas on the person. We went with an ice cream cake again this time. They opened presents and then watched a movie. One of them got to stay over for a sleep over and they watched another movie and then fell asleep on the couch.

Ian also got to go to another birthday party the next day. Normally we would have moved the party but we both showed up to the same event with invites for the same kids and there was no way either of us could move it. He had fun at the other part as well but he was little cranky after from lack of sleep.

Danielle will be going to a conference in a few weeks where she and a co-worker have been asked to give a presentation to a group of executives. That required some shopping for a new outfit.

I tackled the camping closet this week. It was a closet that I mostly cleaned out last year and then we decided to store the camping gear in it. It is on our main level so we don’t have to haul it upstairs every time. The problem was that it wasn’t organized and there was other stuff in the closet. I took out all the old stuff and garbage/recycled some of it. The rest went with the other memorabilia stuff that we still need to come up with a plan for. I then had enough room to organize the camping gear.

Danielle tackled the homeschool closet at the same time. She sorted all the math manipulatives for Rightstart math and put them in drawers we had for Ian in his preschool days. She also sorted the overflowing bookshelves that had avalanched into the Rightstart bin and floor. It didn’t look as bad as the camping closet but it was easily the same amount of work. She got a full recycling bins worth out plus some garbage.

The kids and I finished up in there during the week by cleaning off our desks and sweeping the floor.

We had some fun this week. We finally got back to Philip’s science experiment with much more success . My wife was amazed at how much sugar it took at the end. She had done it as a teen and it didn’t work. Now she knows why. The interesting thing is we put in just over two cups of sugar and one cup of water yet it almost fit a two cup jar. Some of the water evaporated and a cup of sugar has air around the crystals. My question that I still need to look up is how much space is there within the crystal structure that we are dissolving in the solution. Pictures next week when we should have some crystals.

In Rightstart math this week Ian got to make a thousand’s triangle. Margaret helped him a lot as it was a big job. One of the cool things that we discussed was that it is also a fractal. We talked about how many triangles we would have if we made the next iteration. Then Margaret asked a tough question: How many non-black triangles are there at each iteration?

I read all of “Tuesdays at the castle”. It was a short book meant for a younger crowd but a good book. I want Margaret to read it as she will enjoy it. She still tends to get out books that are below her for reading that take her under 30 minutes to read.

I am currently reading “Here there be Dragons”. It looks good but I am only about three chapters in.