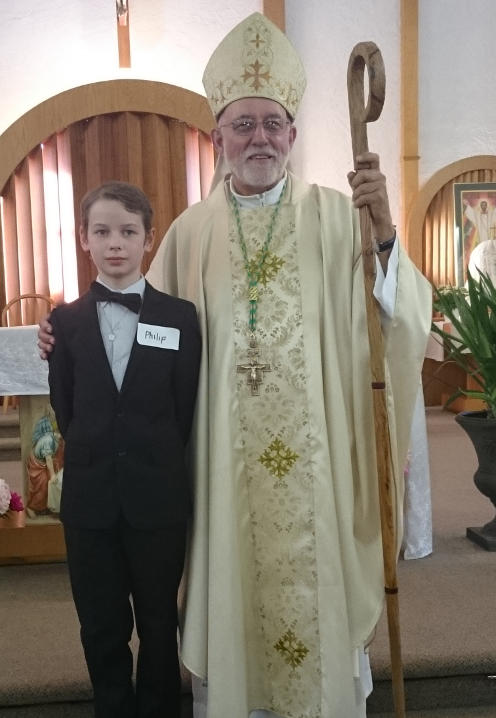 The big thing that happen in the past three weeks was that Philip had his confirmation. We had 19 over to our house for an early dinner before mass. After we all went to mass for the ceremony and cake after. He looks so grown up wearing a suit with a bow tie because ‘Bow ties are cool’. In case there are any who have not watched the new Doctor Who series, it is a reference to that.

Philip, Margaret and my wife went on a hike/camp with the cub scouts two weekends ago and they repeat the same with the scouts next weekend. Philip ate a fish that had only been caught hours before. He also discovered Archie comics which meant I finally got to drag out the box of them that I have from when I was a kid.

We finally got a new dishwasher. The old one had been a lemon since we bought the house. It always left crud baked onto the glasses. The new one is working beautifully, clean glasses every time.

Philip is going to have some orthodontics work done. Some of it is genetics but some is that he is missing 3 adult teeth most likely from all the chemo he received as a kid.

We had our annual Bike to work/school week. My wife rode her bike to work and the older kids rode part way and then rode back to ‘school’. Local businesses manned celebration stations that handed out treats. My wife made it to a couple and the kids managed to make it to one. It was much further than they have been before.

We also had out May Days complete with a Parade. Last year we were in the parade. This year we just watched. Ian is a hugger and occasionally ambushes people. I am not sure the mascot was expecting a hug but whoever it was handled it well.

Ok, its not that bad. Margaret and Ian are on track. Philip has a lot of writing to do in the next two weeks and he will be doing math over the summer.

It is time for the end of the year blitz and prioritizing what needs to be done. We always get it done I just wish it wasn’t always so stressful.

I made a Origami Tardis this week. It was fun but took three tries. The first ended as a crumpled piece of paper. The second was too small and the final fold couldn’t work. The third was made with poster board and thus was hard to fold but held its shape well and gave it a good size. The YouTube instructions are below:

(edit) I wrote a post on it: Origami Tardis

2 thoughts on “Weekly Wrap up: Ahhhhh”