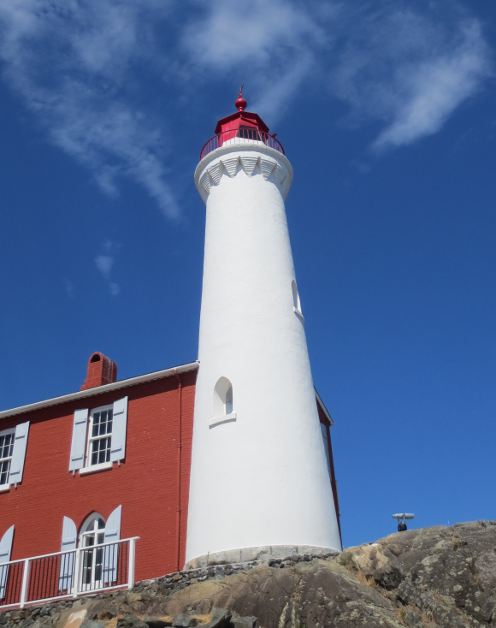 Today we went to a National Historic Site that is actually two. Fort Rodd Hill started in 1854 with three hospital huts. In 1862 the British Royal Navy made it its Pacific base. The coastal defenses started being built in 1866. Fisgard Lighthouse was the first lighthouse on the west coast of Canada. It was built in 1859 and although long since automated, it is still in operation. We bought a one year National Parks Pass last year for Banff and Jasper so this is free for us.

My day started with a walk down to the beach from our campsite. I found a marina and a little parks that was probably a condition for the marina going in. It had a nice view and a Great Blue Heron fishing off the breakwater. I only had my phone with me so zoom was limited. The best shot I got was of him taking off.

The first activity that we did was to defend the wall. Only Philip was even remotely holding the ‘gun’ in a way that wasn’t going to hurt him if it was even remotely capable of firing, It was plywood. He commented on that to the others after that but I’m sure someone out there could find fault with his form.

We then went and explored the upper batteries. The view across the strait is the Olympic Peninsula in Washington State. The guns up here 65 pound rifled muzzle loaders. They could be fired every 2 minutes. With that rate of fire and the challenge of adjusting aim meant they would only be effective against slow ships. They became obsolete. None of these guns were every fired in anger.

The kids took part in the Explorers program where they are give a book with tasks and they can get a prize at the end. One of the tasks was to take a rubbing of the seal on the gun. These were British guns and therefore had the Queen’s seal on them.

From there we explored a natural area. Since this is a National Park there is also species preservation happening at the site. Garry Oaks being the most obvious example. We saw lots of birds flirting among the bushes. One cool thing was that the men of the fort would cut the tops of the trees to get a better view for their guns. The result was the crooked tops of trees.

The next set of guns was capable of firing every 15 seconds. For some reason I don’t have any pictures of those. By WWII they need something much faster and 6 Pound Quick Firing Duplex guns were installed. These could fire 72 rounds a minutes and were still hand loaded. We got to watch a presentation on these guns and just what it took. Everyone had one job and one job only so there were 14 in there with only gloves for safety gear. The loading was a bit risky particularly for your thumbs. The breach is spring-loaded and can take a thumb off.

During our lunch break the kids played on an anti-aircraft gun. This was never part of the fort but the kids have fun on it. It swivels 360 and the barrel raises and lowers. They did have to add a brace to the barrel so it couldn’t lower too far. Kids were clunking their parents on the heads. I kind of imaging a parent completely focused on getting the perfect shot and then bam. We also talked briefly about simple machines and that they allow six year old Ian to spin 2 tons of metal around.

The area is still home to Esquimalt Naval base that has been in operation since 1842. This is the home to Canada’s Pacific Fleet. So you can see what this fort was build to defend.

We walked down to the lighthouse and saw some deer on the way. The kids counted and identified by type the ships that they could see for their explorers program. The displays in the lighthouse discussed the Pig War of 1859. It was a bloodless conflict between the British and the US. The original agreement put the border at the 49th parallel and down the middle of the strait between Vancouver Island and the mainland. Unfortunately the charts didn’t show a second strait that would give Britain the San Juan Islands.

Given that this was a long day we decided to eat out tonight and went to a place called the Spitfire grill. As you can see it is right on the runway of the airport and we got to see the Disney World Mickey plane take off. They also made ½ portion of an adult meal for Margaret so she could have Fettuccine Alfredo. I like it when restaurants are willing to accommodate requests like that.