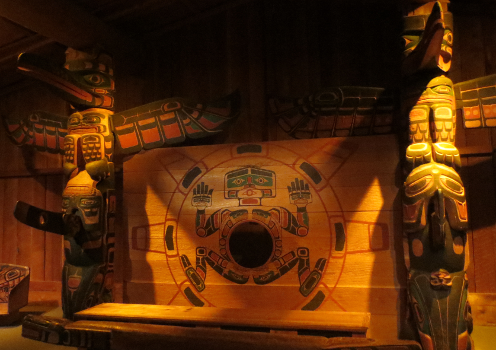 The note taking for the day started in the middle of the night. Margaret had somehow ended up out of her sleeping bag, cold and barely awake she tried to crawl into Philip’s. That woke him up and he decided that she was an invasive species. You know those moments that you know your family, particularly big brother, are not going to let you live down for years? Well…

Today we spent the entire day at the Royal BC Museum. The place is massive and certainly takes a full day. It also means that this post will only be the highlights. The last time I was here was a child and I remembered a number of things but most of it was new or updated.

The first exhibit we went to see was on gold and the search for gold. There were rumors of a gold mountain. Some of these stories came from finding indigenous people with gold artifacts. These took years of gathering and were passed down many generations. They also frequently had religious significance. They were commonly stolen and melted down. Explorers thought that since the indigenous people had so much gold there must be a big source of it. This would start a gold rush and bring people from all over the world in search of the gold mountain; South America, Fraser Valley here in BC, Australia and Yukon.

The next area was one that has been there since I was a child and I have very found memories of. They have a working waterwheel and a place to pan gold. Ian spent 20 minute, half a hour there. He kept wandering away from us making it difficult to read some areas as we tracked him down. My wife reads everything and it turns out that so does Philip. I read what interests me. It meant that I did most of the chasing and sat, Yeah, watching him pan for gold.

We then saw a replica of Captain George Vancouver’s ship, the HMS Discovery. He was tasked with making charts of the west coast for Britain. A number of places are named after him or others on his ship.

The natural history section had a lot of familiar area but with new information particularly to do with the environment or climate change. One part showed how the biomes in BC would move as we moved to a warmer, drier climate. In the displays there is a cougar that is hidden around a corner. If you are just walking through you will miss him. You have to stop and peek back around a corner. Just like a real cougar.

The top floor was all first nations. The entrance to the area had poles with a traditional greeting of the languages of the various tribes. The residential school system tried to eradicate these languages for all sorts of bad reasons. Unfortunately most of these languages are now endangered.

The longhouse crest and carvings belong to a local chief. He allowed the museum to use them and his son and grandson did the carving. It would be like letting someone use you family crest.

We also bought a ticket to one of the Imax shows. We decided on “Journey to Space” which tells the story of the Space shuttles, the building of the ISS and what is coming next. The next is eventually putting people on Mars. The only thing I didn’t know about already is the thought of using an inflatable habitat for the journey. While it sound insane it actually makes sense and offers the most protection to the crew.

We went back to Sidney and had Ice cream since it was hot and back to camp for a dinner of beans and wieners, a camp classic.

Ian – Panning for gold and the waterwheel
Philip – Gold exhibit and the Imax show
Margaret – Old Town in the museum. ( There was an replica of early Victoria you could walk through)
Mom – The First Nation Languages exhibit.

3 thoughts on “Victoria, BC and Gulf Islands – Day 4 – Royal BC Museum”