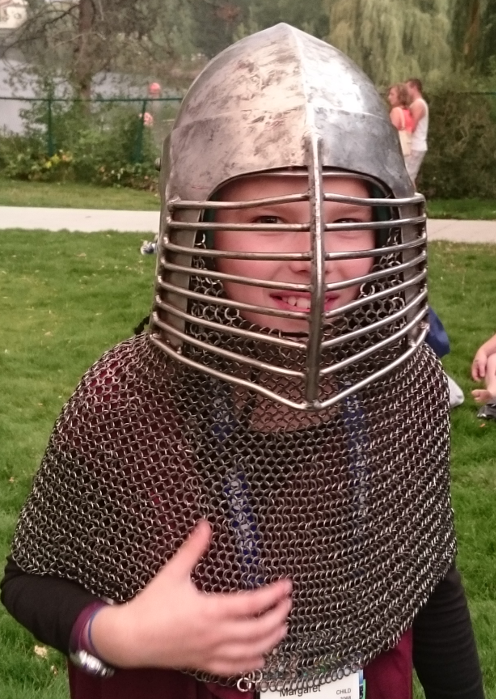 We moved hotels first thing in the morning. The hotel we had booked was the DoubleTree attached to the convention center. We wanted the kids to be able to return to the room if they needed. We got parked but couldn’t get our room until the afternoon.

The registration line was much bigger in the morning. Where I had just walked up to the counter in the evening, now it was a 30 minute line. We have a number of the changes we would make if we get to do this again.

We still had some time before everything started for the day so we went and explored the park. We walked down far enough to see the upper falls. We then walked back and came across a carousel built in 1909.

The first panel that I went to with the kids was one on the upcoming Star Wars movie and our expectations. It was interesting as they discussed the different expectations the kids have compared to us adults who saw it back in the 70s. Did they enter via I, II, III or IV, V, VI or the Clone Wars cartoons. They discussed for us old timers I, II, III were a disappointment because we knew the ending. There was little suspense. For example we know that Obi Wan can’t die because he dies in IV. They also discussed the changes in the DVD release to make the first three a little more PC. Han shot first!

We then went and checked out the kids area. I like the way they set it up as it offered the most freedom without a lot of worries. The older kids were tagged as comets meaning that they could come and go on their own. Ian was tagged as a satellite meaning that he would be stopped if he tried to leave the room. It was by no means escape proof and they made that clear. It was also a lot of fun so really Ian didn’t want to go anywhere else.

The kids started making costumes. Unbeknownst to us a number of people helping out in the kids area were costumeers. They had a lot of knowledge that we should have made more use of early on. Still the kids had fun and it was mostly their work. Ian wanted to be a colorful cat, Margaret a Time Lady and Philip a Ranger. One of the fellows did a beautiful braid of Margaret’s hair that made a braid crown with flowers woven in.

We went to the opening ceremonies leaving Ian at the kids room. My older two kids were recruited as we sat down. I didn’t know what they were going to be doing. The ceremonies started with Native Storyteller giving a traditional blessing. From there he told three stories to his ‘grandkids’ of which two were Philip and Margaret. The stories were traditional but in the setting the fantasy elements stood out. All had a moral to them. We all enjoyed them.

They introduced the guests of honor. One was David Gerrold who among other things was the creator of Tribbles ie “Trouble with Tribbles”. One of the other guests was a NASA astronaut but his launch date got pushed back and he ended up on the ISS during the con. He appeared via video at the end of which he announced that one of David’s critters had snuck on board. He then threw a Tribble at the camera.

The first night celebrations were fun. First we got free Ben & Jerry’s Ice cream cones. Yummy and I haven’t one in ages. One activity was ‘Choose your own Apocalypse’. Three guests described their version of the apocalypse and we voted through a series of steps. We had Climate Change, Cheese Monsters (Think the blob made out of Cheese) and a serum that changed people into My Little Ponies (Think Zombies). The winner ended up being the ponies. Ian got to demonstrate by chasing down another kid with a balloon animal that he had from earlier.

We all enjoyed watching a group spar with medieval weapons and very heavy armor. The weapons clanked as they connected. They let the kids try some on.

We had a very late dinner and went to bed.