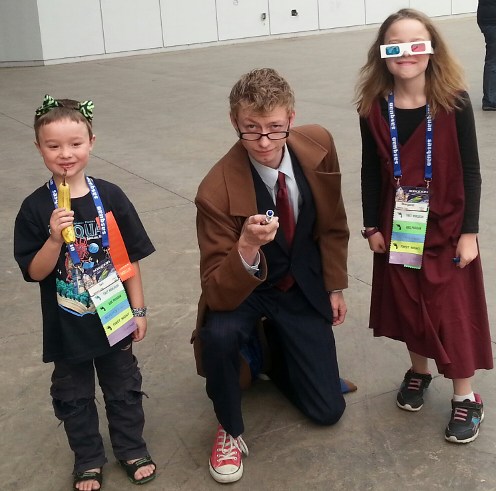 Our day started out with a Doctor Who fan fiction video of the 17th doctor. What the blurb didn’t say was that it was Lego and done by a 14 year old. It was 6 minutes long and actually pretty good. I had fun watching it and laughed a few points. The audio could have been cleaner but they are still learning. It will be interesting to see what they come up with next and watch their skills evolve.

At the end they took questions from us. It takes three weeks to make the sets, one week of filming and three months of editing. One person asked them what kind of camera they used clearly expecting an SLR. He pulled a tiny point and shoot out of his pocket and read off the label.

Immediately following the movie was the Doctor Who procession. A group of us, a good number in costume, went for a walk through the park. We had two 10th Doctors, a third and two fourths. We also had an ‘Ace’ and a pink Dalek. Lots more had things that represented the show like Fezzes, bow ties and scarves. It was fun to talk to lots of like minded people.

At this point we went our separate ways and I went to a panel on 3d printing. There was tons of information and at least three people in the crowd that knew as much as the speaker and he knew plenty. He had designed the base for this year’s Hugos and went through some of that process.

One printer they discussed is one that I would like to get eventually. It is cheap and I saw a kickstarter for it a couple of years ago. At the time it seemed to be a lot of wishful thinking and not a lot of reality. Now they seem to be close to shipping.

On really cool idea that he used for the base is called pepakura. It is another paper craft out of Japan. You use a computer program to flatten a 3d model. You can then cut fold and glue the paper together to make a paper 3d copy. I have found some pdf models. For example here is a Lego man and the website the pdf is from.

My next activity was to go listen to a reading by Brandon Sanderson. I have only read a small selection of his books but I intend to read lots more. I missed what he was reading from but I know it was from ‘The Stormlight Archive’ I think it might be from the third book but I haven’t read the first two so I don’t really know.

I went to two more panels but neither had anything worth talking about. I then went and toured the dealer floor. It was different than I thought. I expected bigger and a lot of useless junk to sort through. While there were a few with the plastic junk that I try to steer my kids clear of, most had made what they were selling or at least knew who did. Most of it was quite expensive and for good reason, it was gorgeous. There were also a number of book sellers. I didn’t buy anything this first day but I did make note of a few place to return to.

After dinner we went to a reading of ‘Where’s My Cow’ by Terry Pratchett. With the audience supplying the sound effects for all the animals and citizens of the city.

Today we also discovered the ‘Con suite’ with free food. I think it would be possible to go the whole Con without buying any food. We ate there a lot as it was convenient and free but we had dinner out a couple of the nights. Tomorrow is the masquerade and for me that was one of the highlights.