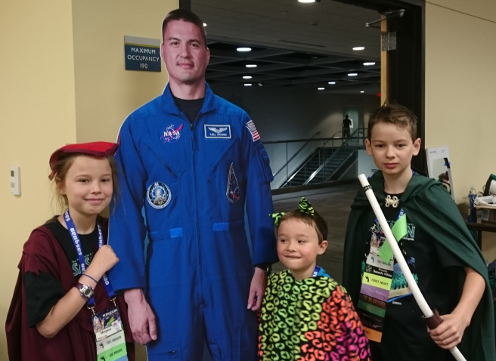 Tonight is the Masquerade and for me that was one of the highlights of the convention. Fittingly my first panel of the day was on costume making. It was labeled for teens but I was far from the only adult in there. I was the only male but that isn’t exactly an unusual situation for me. I learned lots including ways to save money doing it. I ended up buying a book called “Surviving your Creativity”. It was written by one of the panelists and has lots of practical solutions to problems you may not have thought of like “How do I go pee in this thing?”

My next panel was a live recording of three Writing Excuses episodes. They are 15 minutes long and talk about writing fiction. The first was about an author survival kit for going to Cons. The second was about plot twists and the third was an audience Q&A on plot twists. They took written questions from the audience and then selected a few to cover. For those of you new to my blog they are excellent for those kids/teens that want to write their own fiction.

I went back to the dealer room and the art room which I hadn’t found before. Every time I went into the dealer room I felt that I was finding new dealers. I wasn’t sure if more were arriving or there was just so much to see that I missed things the first time through. We bought one print at the quick buy price and bid on another that we also got. I bought some Tardis pendants for some true Whovians. I also bought the Tardis and Enterprise prints. From her website they appear to be originally murals. I would love one somewhere. Two problems: 1 – Where to put it, 2 – How to pay for it.

I went back to the kids area with Ian. As we arrived he talked to another person who was dressed as a cat. That person asked where his tail was. That of course led to me having to make a tail. I put some of my new found knowledge to use and made a tail out of colorful cloth, pipe insulation and a little stuffing, all hot glue gunned together. I had trouble keeping it upright on him but my wife fixed that problem.

As you can see in some of the images, Philip made himself a bow out of PVC pipe and plastic string. It pulled back like a real bow and I think with real arrows it would actually fire. The arrows were completely non functional. One thing that I wasn’t aware of was that weapons of any sort had to be peace bonded. That resulted in Philip encountering security, fortunately in a very friendly way. They checked his bow, drawing back the string, and the arrows. They then deemed it non functional and marked it as peace bonded by putting a blue zip tie on it. They didn’t just single him out, as they finished with him they stopped an adult also carrying a bow.

The smoke in Spokane had been bad all day and it was quite noticeable even indoors. Stepping outdoors to get to the other building for the masquerade revealed how bad it had gotten. I have only once been in smoke condition this bad once before and that was years ago. They were making sure the doors were not held open as people tried to get into the other building. When we got back I looked up the air quality. It was 330, that put it solidly into the ‘Hazardous’ ranking. By morning the wind had come up and cleared it out. Indoors we were just fine. We did hear some stories of people trying to walk in it and having troubles.

“Hazardous” AQI greater than 300. This would trigger a health warnings of emergency conditions. The entire population is more likely to be affected.” Source AirNow.gov

The Masquerade is not something that you can really explain. If you have seen pictures of cosplayers on the web that is like watching a baseball game on tv. Being there live is something else entirely and it was wonderful. You can see the official pictures at: Masquerade Pictures 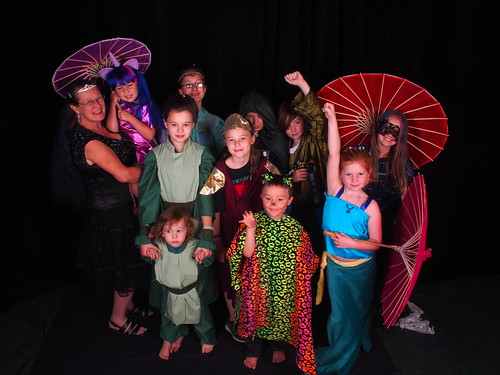 While the judges deliberated we got treated to an hour of Tom Smith Filk music. Filk came about as a misspelling of folk and basically twists common tunes to science fiction / fantasy humor. As you can see Ian did not make it to the end of the show. That kid can sleep anywhere. We did make him walk back. There was just no way I could carry him that distance. The next morning he had no recollection of the walk.