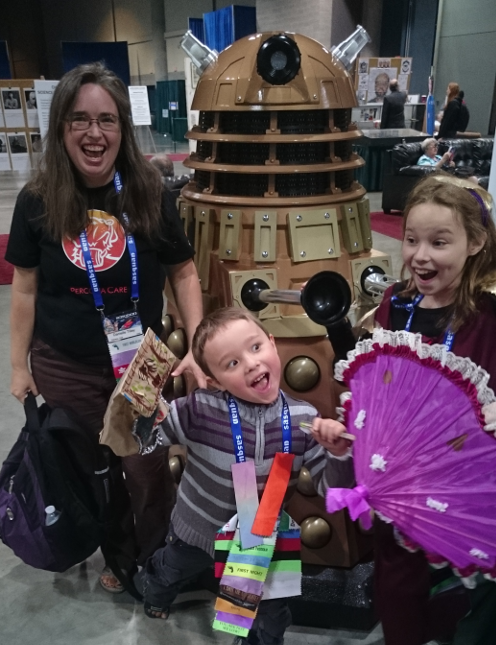 This was a really long day. It is also the day that I have the least amount of notes for. We got up at our normal time but we didn’t leave Spokane until 5pm. That, a different route home and dinner meant we got home at midnight.

My first panel of the day was on historical accuracy in fiction. While they talked about some of the problems of more interest was how to be sensitive to different cultures and their beliefs, stories and history.

One of the panellist was a Native American with many hats but one was being on the board that decides the material for history in California schools. In discussing sources one panelist who was a librarian talked about what made a book a primary source. For him a primary source was talking to someone that was there. He also talked about the problem of who wrote the books. He spoke about the Indian wars and that almost all of what is written is by the people fighting them. In some cases whole tribes are gone with no one left to tell the tale from their side.

We picked up the art that we had bought and helped clean up the kids area. It was a huge mess. A big thanks to Fred and Persis who ran the kids area. They made my kids week. I can not thank them enough. Also a thanks to all the other volunteers that helped out.

I came across an area that was signed as ‘Costume First Aid’ they had all the tools need to fix a costume that had gotten bumped, torn or otherwise damaged. A volunteer there ask if I need help with something and we got talking. She told me about a number of other Cons that we might be interested in. I had had that conversation a few times but each had added more and some repeated others adding weight to those being good. One that I heard a few times was NorWescon in Seattle. It is cheaper and we are planning on attending. Two of my wife’s favorite authors are going to be there.

She also talked about a webcomic called “Girl Genius”. I had heard of it but had tried to start at a bad, confusing spot. She set me right and I read 10+ years of comics in 4 days. You have to start at the beginning and while it is a little hard to follow in the beginning it is well worth it. I want to go back and read it again from the beginning to catch things that I am sure that I missed.

I asked what a pile of fur cut in circles was for. They had made tribbles for Guinan’s Place, an eating area. She got me one that my wife loved. It meant that we had to find ‘Trouble with Tribbles’ when we got home. The kids laughed their heads off.

We went back over to Uncle’s Games as my wife wanted to pick up puzzles for her father. He tends to get puzzles for his birthday and Christmas. Then it was time for our drive home.

We had to go a different route as the one we came down via was closed due to fire. Our best choice has a border crossing that is only open until 5pm so we went with a third route. The drive was very smoky, with a blood red sun adding to the post apocalyptic feeling. To complete that feeling we drove past a temporary air base for fire fighting helicopters and watched a military Chinook come in low out of the smoke for a landing.

For those worried about our drive the main worry was delay, detour or being forced back. We were in more danger from other drivers than anything else. It would have had to have been windy to make it risky and most likely that would have closed more roads. It was windy the following day and more roads did close.

We also came across a camp for the fire fighters. In the smoke I spotted a blue port-a-potty with a white roof. With the week we had just had my brain processed it as a Tardis. I told this story to a friend who without pausing hit me with the best and worst pun I have heard in a long while. She said ‘Oh a Turdis’.

We got cheaper gas on the US side of the border and dinner in a town on the Canadian side that I mostly know by where the fast food joints are. We got home at midnight, unloaded the car and thus ended our journey. For those of you that are finding the idea of WorldCon appealing the next one is in Kansas City, MO. MidAmeriCon II