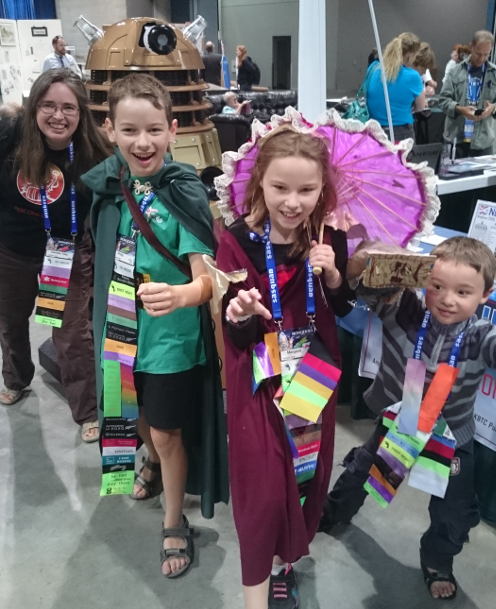 This is my daughter, Margaret’s post on her experience at Worldcon. My posts for the final two days are:

It started with the long drive to Spokane where the convention was held. It was kind of boring but we played games like I-spy to keep us busy. We stopped for lunch at Subway on the way. We were travelling a day early because we had to take a detour around a forest fire. Still , we counted SIX forest fires on the way. Because we were travelling a day early we were in a different hotel than we would be in the rest of the vacation. We had supper in the hotel. After supper daddy went for a walk
while we played in the pool. Since I forgot my goggles I learned how to see under water. How? You wonder. First I went under water with my eyes closed. Then I made my brother do it because I was scared. I had to hold my eyelids up with my fingers to begin with. After a couple of tries I didn’t need to hold my eyelids up any more. After swimming, we went back to our hotel room and slept.

Today we got our nametags and I got my first ribbon. It said “first worldcon”. I made a goal to get so many ribbons that they hang down at my feet. After that we went to “ Star Wars: Are We Hopelessly Spoiled”. It was interesting. After we went to the children’s program and made costumes for the masquerade. I made a time lord costume, Philip was a ranger and Ian was a rainbow kitty. Then we went to riverfront park. It was beautiful. We walked around. We looked at the falls and found a little kids park. The little kids park was boring. Then we went to the merry go round in the park. It went fast. It was so much fun. On the outside there was a thing that had rings at the end witch you could grab. Mommy was the only one who could get them because we(me,Philip and Ian) were on the inside. She got a few but you have to have a bronze one to get a free ride. We each had another ride but we were saving it for later. Then we went to opening ceremonies. Ian went to the children’s program. Me and Philip got to be in it. We got to listen to stories on stage. After the opening ceremonies we went to first night. We got free ice cream. Then I got another ribbon that says “first night”. Then we went to “Ook! A Welcome To Discworld Fans”. I was really excited because I had recently started reading Discworld. After that we went to choose your own apocalypse. There there were three people who sat a a table and told their apocalypse they made up. There was the cheese apocalypse,the bronie apocalypse and the weather apocalypse. My favorite was weather. Then we had supper and went back to the hotel room.

Today we went to a doctor who fan fiction. It was made out of Lego and was good. It was made by a 14 year old. After the fan fiction was over there were questions. I asked which doctor he was dressed up as. After that there was a Doctor Who procession. I wore my time lord costume. There was a tenth Doctor, two eleventh Doctors, three time lords including me(not including the doctors), a fourth Doctor, a third Doctor, a twelfth Doctor( he was the same person who made the fan film) and a pink dalek (I may have miss some people that were in costumes). I had lots of fun at the procession. After I went to “Unseen University – A World Within the Discworld” although I missed some of it to go to “Logan Must Make Star Wars – PG-13” with daddy. It was funny. We then met up with mommy,Philip and Ian and went to get some lunch. While we were walking someone was yelling that there was free hamburgers and hot dogs in riverfront park. It was delicious. After lunch me, Philip and Ian went to “You Like That on Doctor Who? But How Could You Not Like This?”. It was talking about doctor who episodes that were under or over rated. We enjoyed it. Then we went to children’s program and I continued to work on my costume for a few minutes before I went to “Terry Pratchett for Kids”. I was the only kid there. It was in the children’s program. We talked for about 15 minutes and then I went back to making my costume. Then we made light sabers out of PVC piping. After I finished I went to “Docent Tour of the Discworld Exhibit”. I liked death feeding the cats and the part about Tiffany Aching. After I went to each table and asked whether they had ribbons. I got lots of ribbons. After that we had supper and went back to the hotel room.

Today is the day of the masquerade! But first I went to “The YA Discworld novels, and Other Books by Terry Pratchett For Young People”. It was interesting. I forget what happens next but later a 1:00( the The YA Discworld novels, and Other Books by Terry Pratchett For Young People was at 10:00)I went to “Do We Live in the Marvel Universe? Marvel Conquers TV, Movies & Comics”. I was bored with that one. Then I went to children’s program to work on my costume. After we had supper and then we went back to the children’s program. We had delicious cookies, practiced how to walk on stage and then went to have our pictures taken. We were part of the kamikaze kids which means we made our entire costume here. After we had our pictures taken we walked though Smokane. It was called Smokane because it was so smoky out. There was signs on the doors saying dangerous smoke. It was not far. When we got there we waited and waited and watched the huge spider that was waiting with us and waited some more. Once we were done waiting backstage we went to side stage, lined up AND waited some more. Then they started calling us. One at a time we went up on stage. On stage we got our ribbons and went offstage. They led us up to where our parents were and watched the rest of the show. It was great. At the end when to judges went to pick there was a funny concert onstage. Then the judges came back out and told who won. After that we went back to the hotel room.

The first thing I went to today was “The Costume Procession”. That was fun. After I went to “Magic Show”. It was funny but most of the tricks were just silly. Then I went to “Songwriting 101” though I didn’t pay much attention because I was writing a song. After I went to “Masquerade Show & Tell”. I found that very interesting. Then me and mommy had a quick lunch and then I went to “Family-Friendly Board Games”. It was interesting. I made a few comments. Mommy ask me about new to us board games we talked about. To be honest I can’t remember. Much later we went to “Carcassonne”. We have this game at home but we enjoy playing it. After we had supper and then went back to the hotel room.

Another boring travelling day. Luckily we weren’t travelling until later. The first thing I went to was “Heraldry in Discworld”. It was meant for kids but I was the only kid there. It was funny. Then I went looking for a souvenir. Then I went looking for mommy and daddy. while I was looking I found Philip who was also looking for mommy and daddy. We looked in a couple of rooms. Later when we found them they were in the first 2 rooms that we looked. I got 2 souvenirs: a blue jay and a Tardis necklace. Later I went to “Kids’ Concert”. It was good. They told us that all the adults have their brain melted at this point. Then we went to “Stand Back, I’m Going to do Science!”. We got to put flowers in liquid nitrogen then smash them on the table! We also got ice cream made with liquid nitrogen and put chocolate sauce on it(real ice cream is much better). Then we drove home. It was dark by the time we got home.

2 thoughts on “My Trip To World Con (Daughter’s Post)”