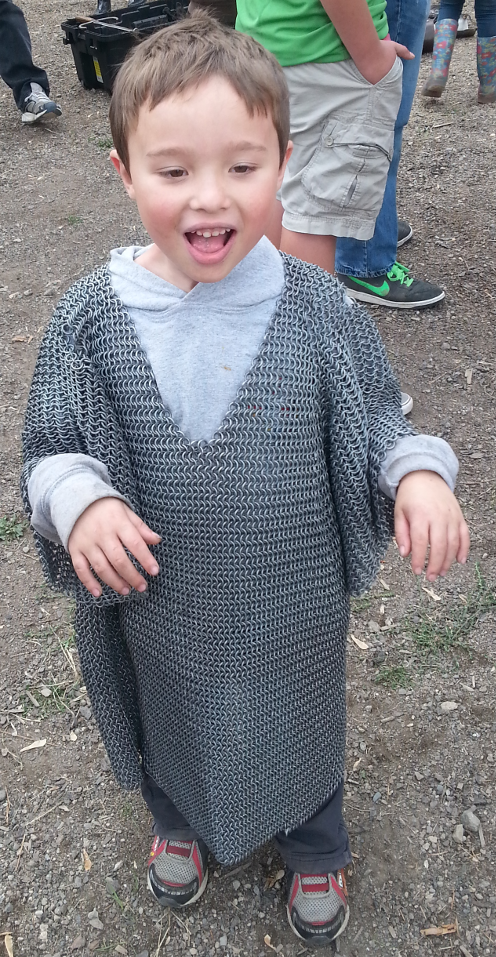 My week started out with a weekend camp with the Beavers called Beavertown. I had a wonderful time. We were in cabins with decent beds and that made it far easier. The camp is a group camp with the 5 Beaver Colonies from our area.

The leaders of each group ran a station for the kids to participate in. The kids were all accompanied by their parents. Our activity was making mini catapults out of elastics and tongue depressors. They fired mini marshmallows. There was also a box castle with two truckloads of boxes. Another had a bungee cord sling shot that I could get probably too much power on. For the kids it was limited by how far they could pull it back which was mostly based on how much they weighed. Then there was catapults made of steel pipe and fired bean bags. I never saw the last one. It was up the hill and I never had time to get up there.

During lunch we were treated a group of Medieval reenactors. They were excellent in every way. The knew their history and conveyed it well to the kids and the adults. They fought with live steel after explaining all the safety precautions that they take. They told a story of Loki, Thor and the Ice Giants. They involved some kids in the telling and Ian got to be Loki.

For the history part they took us through the training of a knight. They would start at about 11 looking after the hunting dogs and move up to the birds and the horses. It was a long process that I don’t completely remember. I do remember that a fully trained, armed and armored knight was about half a million in today dollars.

Afterwards they let us all look at and try on the equipment. The chain mail shirt was 55lbs. It felt heavy to me and it weighs as much as Ian does. I am not sure why his knees were not buckling. We also handled the swords, none of which were sharp and tried on the helmets.

I have also been doing my walks and the morning after the eclipse had a beautiful full moon just above the horizon with all the colors of the sunrise. I cropped the same photo two ways but couldn’t decide which to post. My kids also had trouble choosing so you are getting both. In the tighter crop you can see a building with a gold, pointy dome. That is the local Sikh Temple and is just down the street from us. During their spring festival they invite the whole community to participate. Thus I can say it as beautiful inside as out.

This week Ian learned about verbs. We covered that they were the action that the noun was doing. As I read him off some examples he acted out each one. When I asked him for some he came up with ones that would allow him to do crazy things in my living room. Jump! And he jumps off my couch. Roll and he does a diving roll, stunt man style.

In Science we made homemade ice cream. The kids made a small batch in a frozen cup with lots of stirring and almost enough patience. When school ended the ate it but it could have used another hour in the freezers. I made a batch where I just whipped cream, sweetened condensed milk espresso powder and vanilla together. After that it was 6 hours in the freezer. I made a double batch so I needed to freeze it longer as well.

We went out and watch the eclipse. By the time that it rose above the horizon here it was fully eclipsed. We watched it come back out. The older two understood the physics involved. For Ian we had to explain. A long time ago I wrote a post on eclipses.

Margaret decided to recreate an art project she made in school years ago. It was a plasticine turkey for Thanksgiving. Ian also made one.

3 thoughts on “Weekly Wrap up: Beavertown”