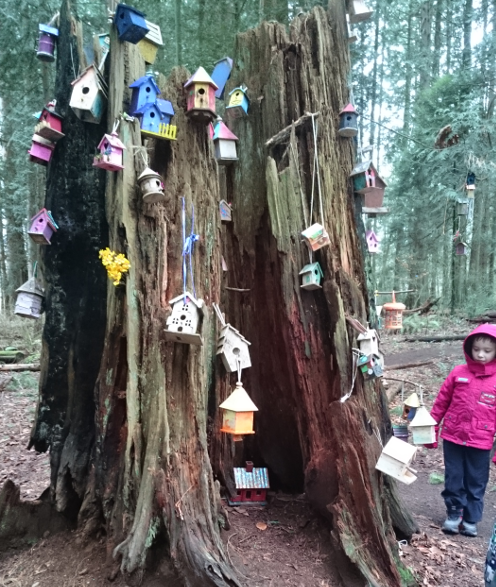 For the first time in years we went to Vancouver and visited with my dad over Christmas. Travel over the passes in winter is always an adventure. On the way down we had to wait in a town called Merritt while they reopened the highway. A semi had lost it on one of the long downhills and hit the concrete barrier, scattering them across the oncoming lanes. Add in several rear-enders as people couldn’t stop. We have these wonderful runaway lanes for when trucks lose their brakes.

We had lunch in Merritt and by the time we finished they had reopened the road. We could smell diesel for about two kilometers as we passed the scene and we saw the truck as we drove past but the road was fine. They had dumped enough sand and gravel that it was practically a gravel road.

We got down there on the 23rd as we wanted to have an extra day if the roads were too bad. My Dad and stepmom had moved so I had to find their new house and where I was allowed to park. It is convenient to the mall and beach and was walking distance to a church. We had a nice dinner and relaxing evening.

Christmas Eve had us at different churches. They went too a service at their home church which is about 45 minutes away and we went to Mass at a little church within walking distance. We walked home to a Crockpot stew and mashed potatoes. My parents got back later. We tried to make it an early night for everyone and insisted that morning not arrive until 7:30.

Christmas morning was fairly quiet and laid back. My family’s tradition is to open the presents one at a time. That mean everyone see what everyone got and slows everything down. The kids got me tickets to go see the new Star Wars with them. They got my wife a new camping knife. I got her a new Bluetooth speaker and she got me a Dremel. Philip got a microphone as he wants to do Minecraft videos. Margaret got a puzzle game called Gravity Maze. Ian got a game called Qwirkle.

On Boxing Day my wife took the kids to the Aquarium. A membership was another gift that they received. Ian has been learning about sea otters and really wanted to see them. It was crowded and raining but they had a great time.

We were originally going to head home on the 27th but the highways were a mess so we stayed an extra day. We went for a walk at a local park. It was a cool place that we have been to before. It used to have a really cool play structure but unfortunately in the 10 years since we last visited it has been replaced with a modern, safer but nowhere near as fun structure. The park was donated to the city by a pair of brother who never married and never had children. They were fairly eccentric and lived in a tree house on the land. They also brought in a wide selection of trees. At some point in the last decade people created a fairy village. It was very cool and we kept finding more. As we saw one area suddenly we would realize that there was more and more.

Our drive home was easier than our drive down and the roads were great for winter conditions. I was still well under the posted speed limit and getting passed by people going way to fast for conditions. I was doing 90km/h (55mph). The speed limit was 120 km/h (75mph) and there were people going that fast. We saw a number of vehicles off the road and three that had turned turtle. We got home safe with no problems other than a small detour.