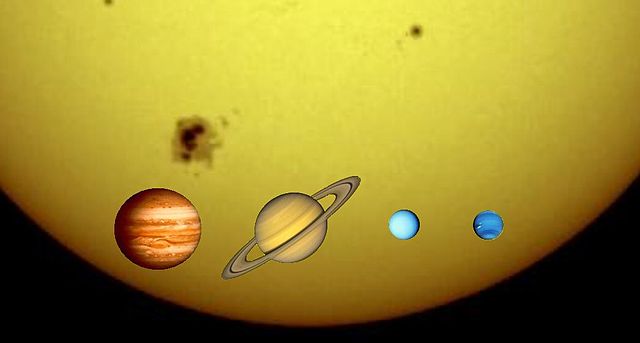 Jupiter and Saturn are largely hydrogen and helium. If you are thinking back to last weeks post with fusion and are wondering why they are not suns the answer is size. They are no where near big enough to have fusion going on. Our sun has 1000 times the mass of Jupiter. The image above has the gas giants with the sun as the background and everything is to scale. Jupiter would need to be about 75 times more massive to have been a star. As we go further into the planet the pressure and temperature rise. Eventually the hydrogen is a metallic liquid under immense pressure. The very core is thought to be molten rocky material but under so much pressure and high temperatures that we really don’t know what it would be like.

Uranus and Neptune while having a lot of hydrogen as we get deeper they have an ‘icy’ mantle. The quote around the ‘icy’ is because it is actually water, methane and ammonia under high pressure and heat. The core is iron and nickle. The blue color that we see is methane in the upper atmosphere.

We all know of the rings of Saturn but the other three gas giants also have rings. The other three have rings are much more faint. They are actually made up of particles of rock and ice. When we first spotted Neptune’s rings they looked like they were not complete. They had gaps in them. Later when Voyager 2 went by we could see that they were complete but there were areas that were brighter.

One thought on “G is for Gas Giant”