Continuing from yesterday, after Disneyland closed for the day we went over to California Adventures. They went and did the coasters again and we had fast passes to Radiator Springs Racers. Then we went and did the giant Ferris Wheel. There are two line one for those that want the traditional Ferris Wheel experience the other has gondolas that roll on those metal tracks you can see.

I shouldn’t have gone but I really wanted to see the view. Well I didn’t really see the view anyways. With rolling along that track I got completely disoriented and close to panic. Everybody else liked the ride so in the grand scheme of thing it was good but I should have gotten in the other line. 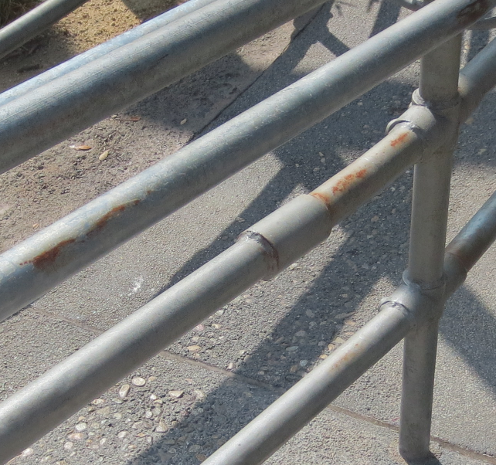 One of the things that I started noticing were the little details that really sold the whole illusion of being in the world they are portraying. The example that particularly caught my eye was the railing in line for a ride in the Cars area. There were extra bits of metal welded on to the railing and parts of the railing had been aged to look like rust. There were a lot more that I noticed but this was the first that made me think. I like watching Adam Savage on Tested.com where he does some model building so it was cool to see something in line of what he does. 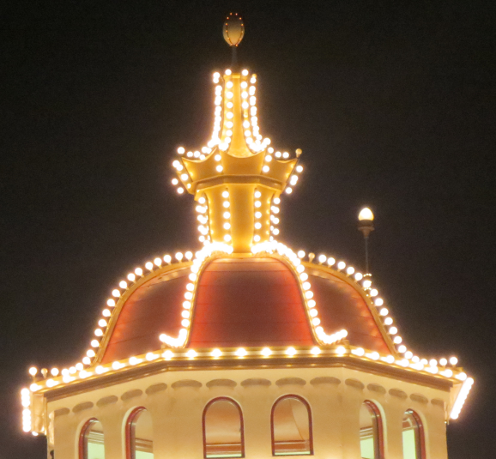 The night ended with World of Color. It was a light show using water jets and projections, all set to music from a variety of Disney movies. It was well worth the wait. We had to get fast passes first thing in the morning in order to get in. One of the interesting things that happen is that I got talking to a woman with a child behind us and she was wondering if she was going to be able to see being that far back in the crowd. A fellow sitting on the ground said that were no bad places to watch from although some spots were better than others. When he stood up it was revealed that he was 6 foot 2. He put her in front of himself but it was clear that he did have a good view. It made me remember a XKCD cartoon titled Umwelt in which the cartoon was different based on you browser, location and a number of other things. Umwelt basically means that different creatures see the world in different ways and it is very difficult/impossible for us to understand how they see things. His view of the world was different based on his height. In this case we are still mostly the same so it is sort of possible to understand his view. I tried once walking around at my wife’s height to see what she saw and it was very different. Things that I but on top of the piano to keep safe for her she can’t see. I thought it was a perfect place. It took me back to the Praying Manits from earlier. How is its view of Disneyland? How can we even begin to answer that question. 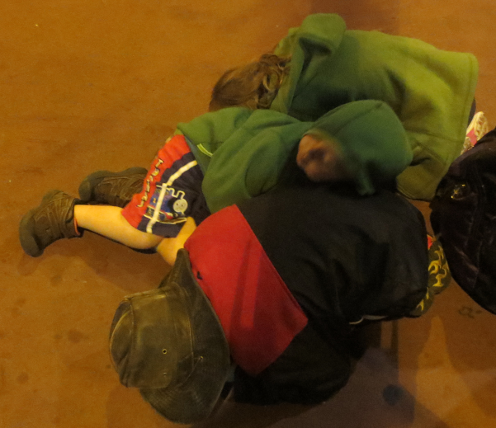 With the World or Color at the end it was well past when the kids should have been in bed. We decided to take the bus that was going to drop us off at our hotel since the kids were not going to walk any farther. We had to wait for it since in runs every 20 minutes. This resulted in my kids sleeping on the concrete sidewalk. At least Ian was asleep the other two were just resting their eyes.