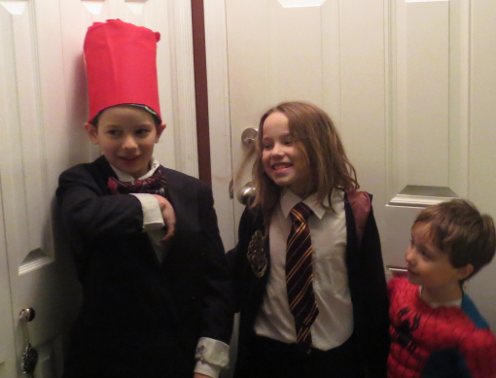 I wanted to wait until Halloween was over so I could post pictures of their costumes and pumpkins. As usual they got way to much candy. The neighbourhood we are in really gets into Halloween with decorating the houses and setting up haunted houses. They are also pretty generous with the candy.

Philip dressed up as the 11th Doctor. He made the costume himself. The sonic screwdriver is a flashlight with some stuff added. The Fez is cardboard and felt. The sport jacket came from a local thrift store. I learned how to tie a regular tie into a bow-tie on YouTube. I haven’t worn a tie in years so I let him borrow one of my old ones.

Margaret went as a Hogwarts Student but everyone called her Hermione. Her costume is recycled out of our costume bin. She did spend some time sewing on a Hogwarts patch that we have had for a while.

Ian went as Spiderman. He had bounced through a number of ideas including being a Dalek but when we went to the thrift store there was a Spiderman Costume in his size for $5 and he wasn’t leaving the store without his find.

With the pumpkins we have something from Doctor Who, a cat, a ghost, vampire puffle and a generic jack-o-lantern.

I have to get back to this. I want to get the storage room back to being a workshop and eventually it might need to be a bedroom.

Portfolios are due Nov 14th so we are into crunch time. Margaret is basically done. I will probably have her do some more science but other than that she is done.

Ian is way ahead. I need to get somethings organized and video some of our activities but most of it is on me.

Philip as usual is trying to pull his backend out of the fire. I just wish I could find a way to motivated him earlier in the semester. He would do better work and not be so stressed these last two weeks.

What If?: Serious Scientific Answers to Absurd Hypothetical Questions. The best way to explain it is to send you to his website and to watch his TEDTalk where he talks about what would happen if you pitched a baseball at relativistic speeds.

I started doing a series on Women in Science. The brief explanation why is on the first post. It is taking me a while to research and write each one so it isn’t going to be a weekly item. The first woman that I chose was Dr Sara Seager. She is an Astronomer with MIT and her area of study is exoplanets.

2 thoughts on “Weekly Wrap up: Halloween”