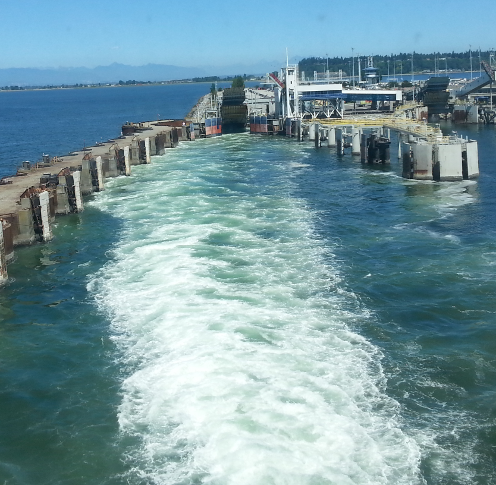 As usual day one is a travel day. We started with a 5 hour drive from Kelowna to the ferry terminal in Tsawwassen. I used to live there and the name is Salish (local First Nations) for ‘Facing the Ocean’. Unfortunately our schedule had us racing for the ferry since traveling on a holiday Friday could mean long waits. We did watch one ferry pull out without us on it but we did get on the next one.

This was as good as we were expecting and it meant that we got on one of the new ships. What I didn’t know until I Googled it is that we were on the world’s largest double ended ferry. They have a capacity of 370 cars and 1650 people. The car decks were full but without a lot of walk-ons they don’t hit capacity on people. University reading break, then they hit max on everything.

Coming out of the dock we had a great view of Mt Baker in Washington State. I managed to get a shot with another BC Ferry passing underneath. Mt Baker is an active volcano for a volcanologist definition of ‘active’. Basically it can still erupt and is the second most thermally active in the range after Mt Saint Helens.

The ferry had on board a Parks Canada person doing a presentation comparing the various ships that have plied these waters. The first was a Coastal Salish Canoe that could take days or weeks to cross depending on the weather and if they had to stop and camp because of the weather. As you can see from the map there is a lot of open water and even the ferries have had to cancel sailings due to wind.

The second was Captain George Vancouver with his sailing ship. It could make the trip in a day, if the winds were right. We will see more on him when we visit the Royal BC Museum in a few days. He explored and made charts of the coast from Oregon to Alaska.

The third was a steam vessel that could do it in a day but required three days to chop enough wood for the journey. The forth of course was the ferry that we were on and it could do it in one hour, forty minutes with its diesel engines.

As you can see on the map some of the passage get a little narrow. The narrowest one that we have to go through is Active Pass and it happens to be the midpoint of the journey so you pass the ferry coming the other way.

Our campground was about five minutes from the terminal. We got all setup and made tinfoil dinners and banana boats. Normally these would be done in a campfire but due to province wide fire ban we did them on the propane stove. The fire ban is because it is extremely dry and forest fires are a very real threat.

One thought on “Victoria, BC and Gulf Islands – Day 1 – Travel to Victoria”