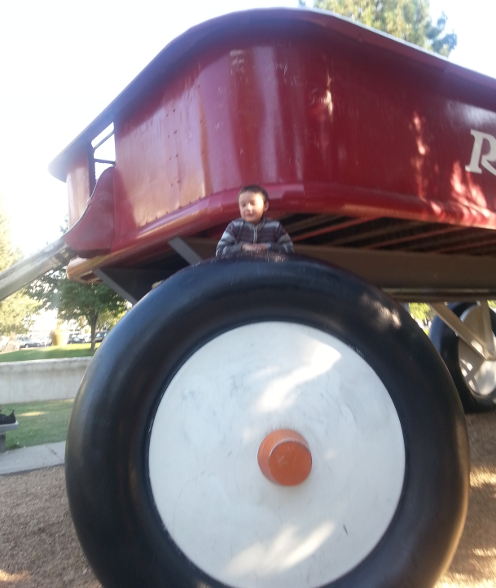 Today I ended up in two science talks that were very interesting and I wish I had gone to more of them. There were too many wonderful things and not enough time to do them all. Next one I want to read about all the presenters and make some plans based on who is talking.

The first talk was about Vesta and Ceres. Some of it was why Ceres is a dwarf planet and Vesta isn’t. Basically Vesta has the size and probably was round at one point but had a large impact. The most interesting part of the talk was the bright white spots on Ceres. If they were ice they should have sublimed away quickly. If they were salts they should be purple. Purple, I learned is what color salt is when it has been irradiated as it would be in space. On top of that they look different in various wavelength. One bright spot is dark in infrared indicating that it is cold but another doesn’t even show in infrared. I will be following the Dawn mission for better images and answers.

My next talk was on costumes in stories. It was very interesting as they commented on some common mistakes and things that were done right. They talked about using clothing to represent wealth, status, occupation, rank, clan, cultural and moral values. The example they gave for moral values was in the 18th century indigo came from plantations in South Carolina and thus was tainted by slavery. Some people would not wear the color for that reason. So wearing that color could be seen negatively by others.

One of the common mistakes was that of supply chain. Small villages having many types of fabric and colors when there isn’t a bigger city nearby. So where did the variety come from. Some could come from caravans traveling and trading but in some of their examples the village had way more clothing than they could reasonably trade for.

I went back to the dealer area with Philip to look for his souvenir. He found a game that looked interesting. We went to the game room later in the evening and played a round. Philip decided that the game would be his souvenir for the Con. I will post more on it when we get time to play it here and I have pictures.

Philip and I then walked to a nearby book store with a companion game store called Auntie’s Books and Uncle’s Games. Both were wonderful. I was looking for a particular book that I had heard about at the Con. They didn’t have it but after talking to me they ordered in some even though I told them I would be unable to return. If you are in Spokane it is definitely worth a visit.

We went to a sort of open area where there were different groups and I guy who was driving one robot with his phone while a second tried to follow it. The human controlled robot had a red ball on it. The programmed robot was chasing anything red. We talked about the robot we were building and the grade level that he was teaching. He was a college prof. I tried to break their programming. First I charged the following robot. It was programmed for that possibility and backed off. Second I ran the human controlled robot through my legs and made a hard right. The following robot tried to cut the corner and ran into my foot. This it wasn’t programmed for as it spun its tracks trying to push through. I guess that will be his students next assignment.

I found a table that had some ribbons that I had seen others wearing. Ribbons were available everywhere and the kids wanted them all. The one that I liked was at a table that had ones to identify what pronouns you wished to be called by. I picked ‘he – Him’ but I could have made other choices including ‘undetermined’.

The next thing was a 3d printer that was different than anything I had seen. In talking to the guy it was a ‘Delta’ printer. It is faster that x,y printers. Basically it had three pillars and arm that could slide up and down thus moving the head in any direction. It took me a while to figure out how it worked. I guess the closest analog is Cartesian vs polar coordinates.

We also found a display of costumes while they were beautiful it was nothing like watching the Masquerade but it was fun to get a closer look and see how they were made.

The next talk that I went to was another science talk. This one was one gravitational waves. Gravity is the force that we understand the least about. Gravitational waves would be the result of the interaction / collision of super-massive object like two black holes. We may have finally directly detected these wave last year but that needs confirmation and peer review. We do have some indirect evidence that they exist.

After I went back to the kids area to get Ian and ended up going over to the park with another parent. Ian and her son had become friends. We let them play on the giant red wagon. Ian’s friend was a little younger and smaller. Ian was trying to get him do things that he was having trouble with. Part of it was also that he was the oldest whereas Ian has been trying to keep up with his older siblings for years.

With our testing of the game that we ended up buying we didn’t get to dinner until 9:30. We had planned on eating at Chili’s. One of the things about living in Canada is we get US stations and therefore US ads and some are for restaurants that we don’t’ have. It was good for the price and resulted in leftovers. Now it was well past bedtime for such a fun filled, long day.