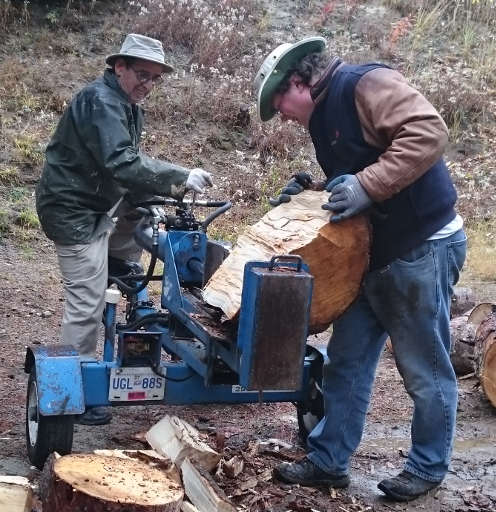 I missed another post. Last weekend was Thanksgiving up here in Canada and that meant going up to my wife’s uncle’s cabin to get it ready for ski season. Mostly that meant chopping wood. We gathered, split and stacked two truckloads and got another two loads for next week’s crew. While it is hard work it is also a little fun and it means being warm all winter without electric heat.

On Sunday we took it a little easier and went for a hike. There is no snow on the mountain yet so we walked some of the ski runs. For some reason I took a picture of this little tree.

We didn’t go that high on the mountain. That would be a much more ambitious hike. We did get some great views down the valley.

At one point we came across some cows. The mountain is also used for grazing in the summer. The cows are docile but we also had two herding dogs with us that moved the cows around a bit. They came when called so all was good.

We did have the full turkey dinner on Sunday night. Everyone brought one part so we took care of the pies.

Homeschool is humming along. The first week we didn’t get anything entered into Homeschool Tracker. So it was a bit of a loss. Things still happened just not what was intended. The second week was a short week due to the holiday so again it didn’t feel like we accomplished enough.

Margaret and Ian went to a book release reading and signing of a local author. The book is a wonderful book telling the story of a sea otter. It is aimed at Ian’s age but Margaret also enjoyed it. Ian is now reading it chapter by chapter and answering some questions on it. We are allowing him to type his answers on the computers. So the questions were typed by mommy but the answers and the sentence at the bottom are typed by Ian.

3 thoughts on “Weekly Wrap up: Thanksgiving”