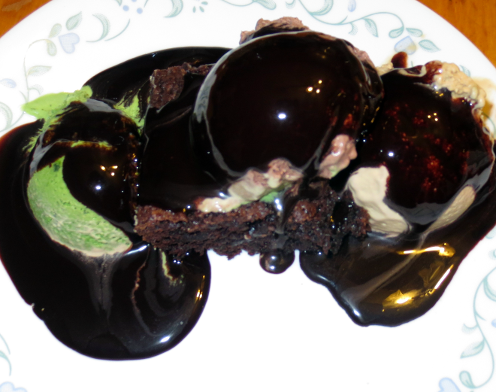 Well it has been several very busy weeks. To get caught up I am going to cover the highlights.

We forgot to take pictures of the pumpkins this year. When we realized that Philip took out a candle one night and got pictures of all of them all lit. The pumpkins were starting to mold and that is visible in the photos and makes them creepier. Ian’s was supposed to be a Pikachu but the mold it looks more like a deranged, zombie bunny.

We had friends over dinner. We had been talking during the summer and the subject of soup came up. That resulted in me putting a reminder in Google calendar to have them over for seafood chowder in the fall. Summer is just to hot for soup. I don’t remember the details of the original conversation, that is why I put it in Google. It was a great night but I got carried away on the cooking. That is not a bad thing as you will see below.

Remembrance day also fell in this time window. This time as a Beaver leader I had a bunch of kids and other leaders and we were in the parade. This year they fixed some problems and we made it in to the center. It meant that the kids could see and they were very well behaved. The legion puts on hot dogs for the kids afterwards.

We scrambled through the last two weeks to portfolios. Last weekend we presented with all the kids doing well. We need to catch Ian up on reading but he is improving and we should have him caught up by next school year if not sooner. Again he is reading at a grade 1 level which is actually the grade he would be in based on his age. So really all is good.

Philip needs to put more detail into his science reports and in general write more. That is always a battle. Overall this was the most stress free portfolio he has had. I attribute that to Homeschool Tracker.

Using the Homeschool Tracker website is still a bit of a love/hate relationship. I love that we got more accomplished and that we were the most prepared ever for a portfolio. I want to be more unschooling in philosophy however I think the increased productivity out weights that philosophy.

Everything I put on the table for that dinner was made from scratch. I made a cheater version of homemade ice cream that worked very well other than I made one flavor that wasn’t a hit. Live and learn. In case you are wondering the flavors were Chocolate, Coffee and Matcha. I also made homemade chocolate sauce and brownies.

For the main course I made a Seafood Chowder, a Sweet Potato and Ginger Soup and homemade bread. The bread and the chowder I have made many times. The Sweet Potato Soup was an experiment that worked. I had a recipe that I sort of followed but mostly just winged it.

I am not sure how I ended up finding this on YouTube but I rediscovered Weird Al Jankovic. This one in particular I found hilarious: “Word Crimes” sung to the tune of “Blurred Lines” by Robin Thicke.

2 thoughts on “Weekly Wrap up: Catching Up”