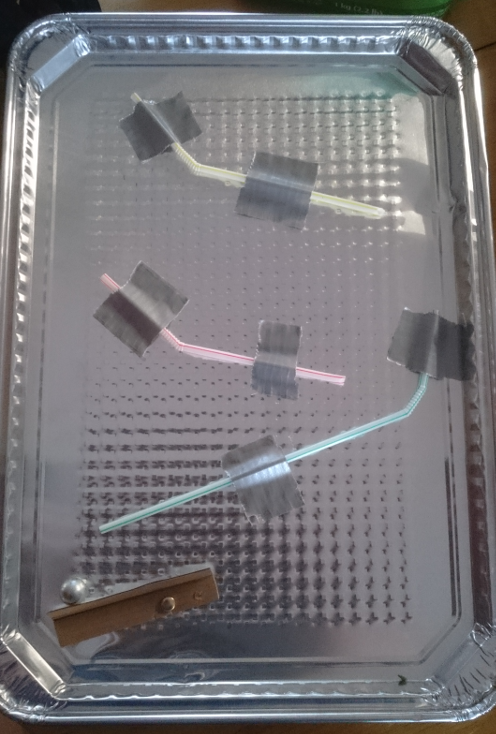 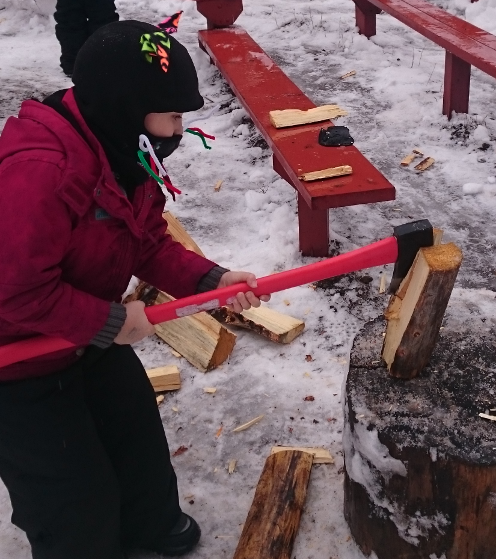 It has been another two relatively uneventful weeks. The kids and my wife did go to an winter camp with all levels of scouting. Each group sets up a station that the kids go through. They did all sort of things like throwing knives and starting fires. We have lot of photos of Ian on the camp mainly because he got to do a lot of really cool stuff for his age.

As you can see he did manage to light the tinder but not get the fire going. Just lighting the the tinder with flint and steel is quite a challenge.

I have been making some more quilled creations. A friend of mine is getting to go on a student exchange to Australia for a year starting this summer. She needs to raise a lot of money so I have made these to be used as raffle prizes or whatever else she comes up with to make money with them. I took the photo of the dolphin and she took the photo of the butterfly as I forgot. I am going to have to steal some of her tricks for photographing these.

I am just about done with the downstairs. I went through all our book shelves and sorted. As you can see there is a lot that I want to get rid of but I need my wife to check it over and veto stuff. It is tough getting rid of books. These are all that haven’t been touched in years and a lot are very out of date programming books.

The empty area will eventually be the kids new bedroom. The five bins are full of stuffies. NO MORE STUFFIES!!! The area looks smaller in the photo than it really is.

Well we have three weeks to our portfolios. We have a lot of science to do in the next three weeks. Margaret is going to be experimenting with potato batteries and seeing if size, type, cooking, or cutting change the power available. She told me today that she needs 28 yellow and 28 russets…

We have ordered a light box kit with lens, mirror etc for Philip but it hasn’t arrived yet. So we decided to cover off some of the other requirements and he built a hydraulic arm. We haven’t seen it work yet as we are waiting for the glue to dry. 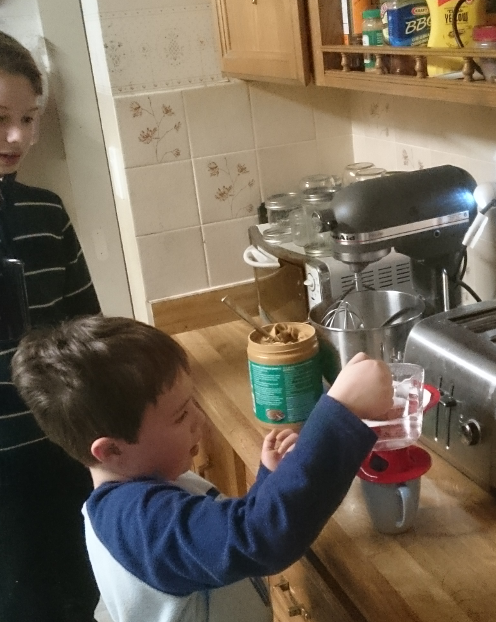 It has been a fairly normal week here. I think the weirdest thing this week was my almost 14 year old teaching my almost 7 year old how to make his own coffee.

I also wrote a post this week on a craft that I made for Christmas. It is called quilling and involves rolling paper in a variety of ways. The art form started with nuns making decorations with the trimmings from the edges of gilded books. Anyways I made two TARDISes. (Quilling – TARDIS)

We are reorganizing our basement. Ian needs a regular size bed. Currently he is still on his toddler mattress, wedged into the corner of the loft bed nest. Unfortunately there isn’t enough room for another bed in there. So they are getting the TV room. That means rearranging everything including moving the wall mounted TV. On the good side the kids actually sorted their toys. We are getting rid of two boxes of toys, five bags of garbage and three bins of recycling. We also have an old DVD player and 5 orphaned remotes going to electronic recycling.

We have been trying to get caught up on math for both Philip and Margaret. Margaret has succeeded. Philip has until Sunday or he starts losing privileges. He should be able to make it.

Portfolios are coming up so there is a push to finish everything off and get ready. I am feeling confident.

We did another of our take it apart Fridays. This week’s item was a telescope that I found at the thrift store for $10. It turned out to not be nearly as exciting as I had hoped. Removing four screw was all it took. Still it worked for Philip doing optics. The kids did play around with the parts, holding them up and seeing what happened when they combined them.