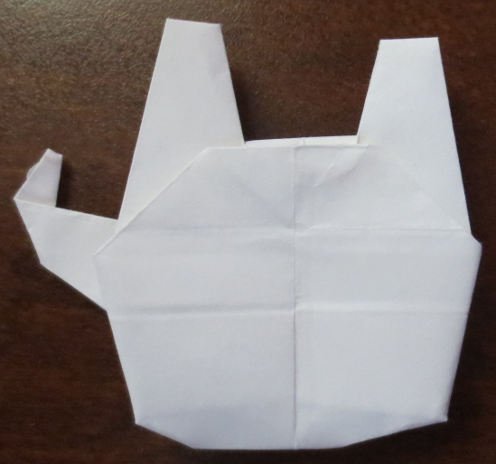 When I saw the book I just had to have it. The Millennium Falcon is the first I tried to make from the book. It came out great on the first try which for me is rather unusual. All the parts are clearly there and it is easily identifiable. The book has sheets (2 per model) that comes out with the item printed on it. I haven’t tried to do that yet. I don’t want to waste a limit resource until I am sure I can fold it perfectly.

Happy: 8/10 I want to try it with the preprinted paper but I am happy with the result.

Relaxed: 9/10 No crumpled paper is always a good thing.

Intellectual: 6/10 This one was fairly easy for me.

The instructions to the Millennium Falcon are available on his website so I don’t have a problem linking to the video. The book is well worth the money if you are a Star Wars fan. 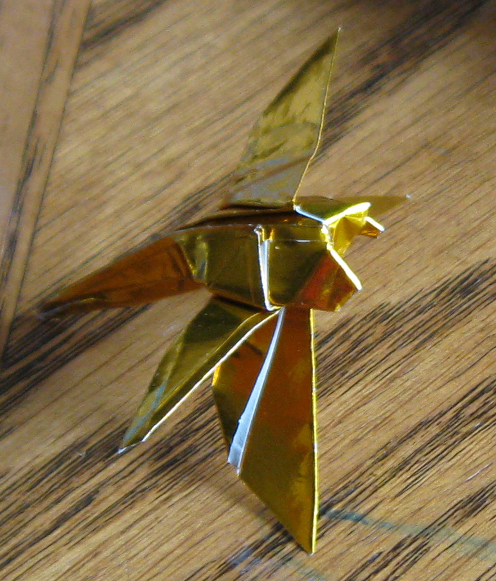 My thoughts: We saw a number of dragonflies on our vacation and I got a good close up picture of one. I wanted to see how hard it would be to make an origami one particularly with the four wings. The first one I did had me cut the wings down the middle to make four where there were once two. It works and it looks right but the second video got four wings without any cutting. I also prefer that one especially in the gold foil. I would love to find an iridescent blue or green foil.

Happy: 9/10 I liked the results and it was cool figuring out they got the four wings.

Relaxed: 9/10 No crumbled up paper this time. The gold one came out better since it was the third but that is to be expected.

Intellectual: 7/10 It was easy but I did take the time to figure out the wings and that was interesting.

Folding and Video by: Alejandro Vesga

This was fun and a lot easier than I originally thought after first watching the video. It took me three tries to get one I was happy with. The first ended as a crumpled piece of paper. The second, the paper was too small and the final folds just wouldn’t work. The third I made out of a large piece of poster board. It was hard to fold being so thick but it gave it a good size and rigidity. I think I would use something a little thinner next time. My lantern didn’t work out as well as his and I believe that is because of my choice of materials.

Happy: 9/10 If the lantern had come out as well as his this would be a 10/10. I wanted to make one for a while and was very happy that it was instantly recognizable even without the stickers for windows.

Relaxed: 7/10 Crumpled up paper is not good but overall with a successful end result it was good.

Intellectual: 7/10 It wasn’t as hard as I thought but finding a suitable material was a challenge even with all my kids craft supplies